Friday, September 30
You are at:Home»News»Sarawak»Four flyovers to be built in PMC area this year, says Lo 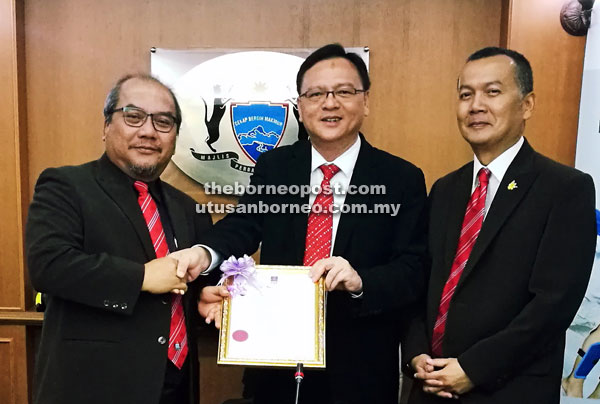 Lo (centre) and Andrew hold the certification while Ahmad looks on.

KUCHING: Four flyovers costing about RM200 million will be built in the Padawan Municipal Council (PMC) area this year.

Its chairman Lo Khere Chiang said the four flyovers were at Mile 4, Mile 6, Mile 7 and Mile 9 of Kuching-Serian road as part of the RM16 billion-Pan Borneo Highway project.

For the Mile 4 and 6 projects, construction works would commence in June, while works on the other two would start in August.

“All the projects will be completed in 2020. This is definitely good news to the people,” Lo told a press conference at the council’s headquarters yesterday, after chairing a full council meeting.

Lo, who is also Batu Kitang assemblyman, said the soil study for the projects had been carried out long ago. He also said the council had been allocated RM30 million under the Malaysian Road Records Information System (Marris), a significant increase from last year’s figure

Last year, the council was allocated RM17 million, and RM12 million in the previous year.

“The money given to us (council ) is a challenge for us…we will make sure that we spend the money on what we want to do and we will not fail the people. The projects will be delivered ahead of schedule,” Lo said.

Still on roads, Lo brushed aside talks that the construction of the Pan Borneo Highway was facing problem, stressing that construction work was progressing smoothly.

He said there had been talks that the contractors had not been paid and that the government had no money to carry out the project.

“This (March 23) morning, I had a briefing with the project consortium and I was informed that the project is going smoothly.”

Meanwhile, Lo said the council had been awarded the latest ISO 9001 2015 certification, a great recognition and achievement for the council. He said the certification was received in December last year. It ‘s a world wide standard lasting for four years (2016-2020). It would be reviewed after that.

“The certification means the council has achieved a lot and will motivate us to improve and do more,” Lo said.