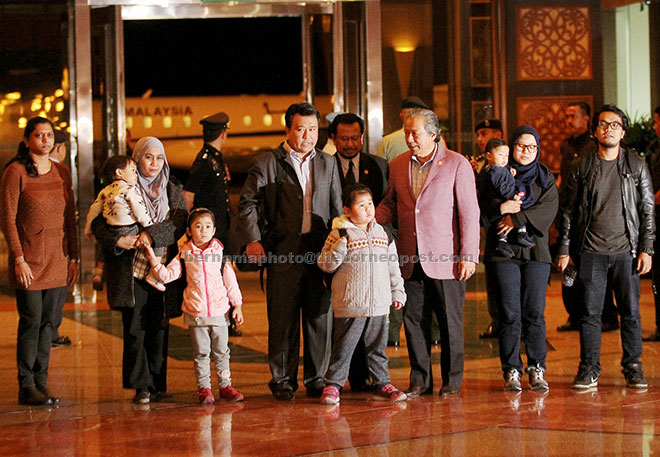 SEPANG: The nine Malaysians who were barred from leaving North Korea in the aftermath of the murder of North Korean leader Kim Jong-un’s half-brother Kim Jong-nam here last month, have safely arrived home.

All came home via a special aircraft which arrived at the Bunga Raya Complex, KL International Airport (KLIA) at 5.03am Friday and were welcomed by their respective family members.

Also on hand to welcome them were Foreign Minister Datuk Seri Anifah Aman.

Prime Minister Datuk Seri Najib Tun Razak in a statement last night announced that the nine were allowed by the North Korean government to return to Malaysia.

Najib, in a posting on Twitter earlier, said: “Alhamdulillah (Praise be to Allah) the Special Aircraft carrying the nine Malaysians has flown out of North Korean airspace. The diplomatic crisis is over.”

Following the development, the prime minister said Malaysia had now allowed North Korean citizens in the country to leave.

Tensions between Kuala Lumpur and Pyongyang arose following the murder of Jong-nam, 46, at the Kuala Lumpur International Airport 2 (klia2) here on Feb 13.

Two foreign women daubed the face of Jong-nam with the nerve agent VX at klia2 while he was waiting for a flight to Macau.

Subsequently, Jong-nam was pronounced dead while on the way to the Putrajaya Hospital.

On March 1, two women, Siti Aisyah, 25, an Indonesian, and Vietnamese Doan Thi Huong, 29, were charged in the Sepang Magistrate’s Court in relation to the killing.

The diplomatic tiff came about after North Korea’s Ambassador to Malaysia Kang Chol made wild allegations against Malaysia on how it handled the case, resulting in Malaysia declaring him persona non grata.

He left Kuala Lumpur on March 6.

On March 7, Pyongyang barred Malaysians in North Korea from leaving that country and Kuala Lumpur took the same action in a tit-for-tat move. — Bernama