State to set up corporation for building, managing its export of agriculture products 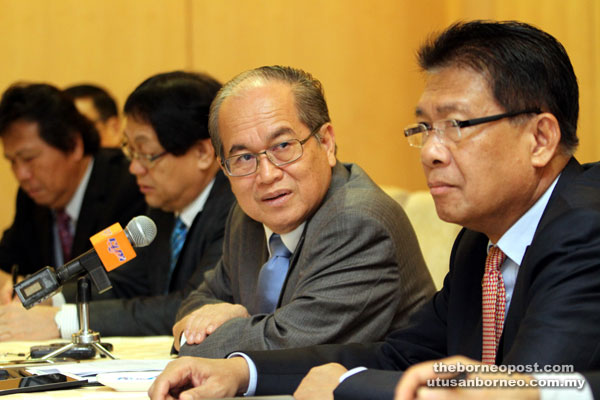 Uggah (second right) announces the establishment of the export corporation during the press conference.

KUCHING: The state government will establish a body for building and managing the export of Sarawak agriculture products to overseas markets and to ensure that there are sufficient export orders on a sustainable basis, to be known as Sarawak Agriculture Products Export Corporation.

Deputy Chief Minister Datuk Amar Douglas Uggah Embas, in announcing this, said the corporation would also be responsible for ensuring sufficient supply of the promoted agriculture products by working closely with smallholders and local plantation owners.

Apart from that, the corporation would also ensure competitiveness by promoting the use of the latest technology in agriculture, whenever necessary, and to encourage the use of technology through capital participation, he added.

“I am pleased to announce that the Sarawak government, through the export corporation, will inject capital for technology into agriculture for the purpose of modernising the sector.

“The export corporation will take up equity in promoted agriculture production projects which are properly planned and managed for the purpose of upgrading agriculture technology and will withdraw its equity from the projects once they have become commercially viable on their own,” he told a press conference after launching the seminar on sustainable, quality and safe agriculture production at Imperial Hotel here yesterday.

Uggah, who is also Minister of Modernisation of Agriculture and Rural Economy, said it is vital to have a properly organised agency to regulate and manage export products, given each country has its own regulation on the quality of food they want.

“For example, if we want to send the food to Singapore, they have their own requirement such as the level of pesticide in the products, which we also must meet. So unless we meet the requirement of the foreign market, we will never be able to market our product overseas,” he said.

Considering that Sarawak has huge land, Uggah said it has great potential to become the leading producer of food in the country.

He also said to ensure that there is transformation of agriculture in Sarawak, the state government would have to take a new approach in tandem with the digital economy as envisioned by Chief Minister Datuk Amar Abang Johari Tun Openg. He believed that with the increase in broadband speed and so on, Sarawak products would be very easily marketed globally.

“With high broadband speed, places in Kapit, Sarikei, Betong, Sri Aman and other parts of Sarawak will then be able reach out to the world with their products.

“At the same time, we also have world standard products, which are able to meet all those world standard markets. If we can work together to achieve this, I think the future of our agriculture will be a lot brighter,” he said.

As a start, Uggah said the corporation would initially focus on bananas, coconuts and durians for export to Peninsular Malaysia and Singapore as exports to China and Japan would take a longer time to materialise because of the administrative protocols involved.

He said the pilot project might start in the Sarikei and Betong divisions before the scheme is extended to other areas of Sarawak.

On a related matter, he said an international conference would be convened with experienced foreign speakers for the purpose of exploring opportunities in the production and export of tropical fruits by Sarawak and also to encourage the participation of young talented entrepreneurs in the agriculture sector.

Expected to be held in two or three months’ time, he said the international conference, would be open to all interested farmers from the rural areas and also the urban centres of Sarawak.