Saturday, August 13
You are at:Home»News»Sarawak»Fuel from water resources 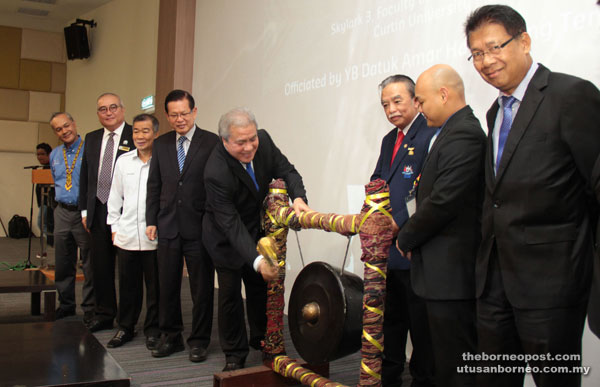 Awang Tengah hitting the gong to declare open the International Conference on Materials Technology and Energy (ICMTE) 2017 at Curtin University of Technology Sarawak.

Minister of Industrial Development and Entrepreneurship, Trade and Investment Datuk Amar Awang Tengah Ali Hasan said this augurs well for the state’s drive to be a regional green energy powerhouse.

“Now, we also have investors expressing interest to produce hydrogen for fuel from our abundant water and hydropower resources,” he said when declaring open the International Conference on Materials Technology and Energy (ICMTE) 2017 at Curtin University of Technology Sarawak here yesterday.

It currently has installed capacity of 4,696MW as of 2016, out of which 74 per cent is from hydro, natural gas (13 per cent) and rest are from coal, diesel and small renewable sources.

“We are proud to say that Sarawak is a major producer of green energy which is sufficient for our industrialisation agenda and domestic consumption.

“The state is currently exporting 100MW of electricity to West Kalimantan, and is projecting to raise it to 230MW by end of 2018 while exploring export to Brunei and Sabah in the near future.

“The state is also looking at more solar farms when solar energy technology improves further to lower costs apart from existing small ones in Bario,  Murum and Tunoh,” Awang Tengah, who is also Second Minister of Resource Planning and Environment, said.

“This plant can produce up to 1GW monocrystalline ingot, 1GW for wafer, 600 MW for passivated emitter rear contact (PERC) cells and 600MW for modules, while polycrystalline silicon is produced at Samalaju Industrial Park in Bintulu.

“We have the complete supply chain for solar energy industry in Sarawak,” he elaborated.

Earlier, he welcomed the conference participants to Miri, which he described as the birthplace of the oil and gas industry in Malaysia.

The conference will see 50 papers presented and discuss the challenges and issues facing the industry and the environment.

“This conference of the scientific community gathered here today can explore new ways to tackle energy and environmental issues through innovation and R&D in energy related industries and in materials technology.

“It is hoped that this can also help to spur local R&D efforts, perhaps making use of our newly completed Biotechnology Centre located right here in Miri Curtin University,” Awang Tengah said.