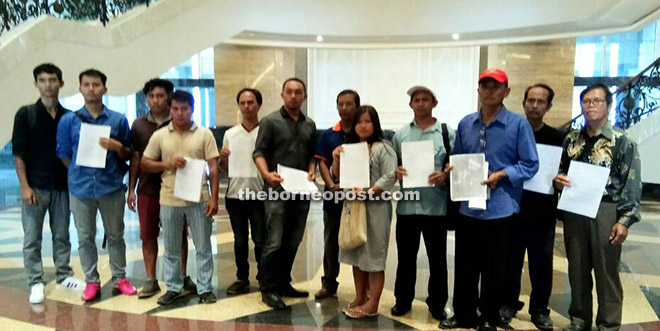 Mastupang (fourth from right) and the representatives from the villages after presenting the memorandum yesterday.

KOTA KINABALU: A delegation from the Gabungan 6 Kampung (G6) Pitas action committee is appealing to Chief Minister Datuk Seri Musa Aman to intervene and protect the land in their villages from alleged encroachment by the owners of a prawn farming project there.

The delegation was met after handing over a memorandum protesting against the encroachment into the Native Customary Right (NCR) mangrove swamp in the six villages to a representative from the Chief Minister’s Department at the new State Administrative building here yesterday.

He said the area where the prawn farm was being carried out is in the NCR land of these six villages and it represents the culture, lifestyle, practice and traditional knowledge of the Orang Asal in the area.

“The destruction of the area would mean destroying our identity as Orang Asal who are dependent on the area,” Mastupang said, adding that the area is also very sacred to the Orang Asal there.

The G6 action committee claimed that the implementation of the prawn farm project does not give overall benefit to the Orang Asal there and instead would bring about negative impact to the environment.

“Mangrove trees are very important in helping to reduce the impact of climate change which has affected our lifestyle especially in our agricultural activities. We are affected by the long dry season, unpredictable weather and flooding.

“The mangrove swamp where the project is located is also the natural habitat for diverse flora and fauna which are protected by law and these include the proboscis monkey, honey bear and white hornbill among others,” he pointed out.

Mastupang added that mangrove swamps are also breeding areas for fish, prawns and crabs as well as other species of marine life.

The area is also close to the Tun Mustapha Marine park which was officiated by Chief Minister Datuk Seri Musa Aman in Kudat last year, he stressed.

Another worry of the villagers was that the waste from the prawn farm project will be pumped straight into the river resulting in major pollution, he claimed adding that the polluted water would flow into the largest marine park in Malaysia.

“In 2014, the Orang Asal community sent a protest letter to the Environmental Protection Department about the fraudulent Social Impact assessment in the EIA report. This was followed by the first letter protesting against the project in 2015 and a second protest letter with a press conference in 2016,” he said.

Mastupang lamented that before the project which was said to bring development and socio-economic progress, there were promises of job opportunities, road upgrading as well as better access to basic infrastructure like water and electricity supply.

However none of the promises materialised. In fact some of the ponds that were dug were not beneficial and are now in disuse, he claimed, adding that the loss of their source of income and food has made the Orang Asal in the area poorer than before.