Tuesday, May 17
You are at:Home»Business»Oil & gas companies to promote use of natural gas 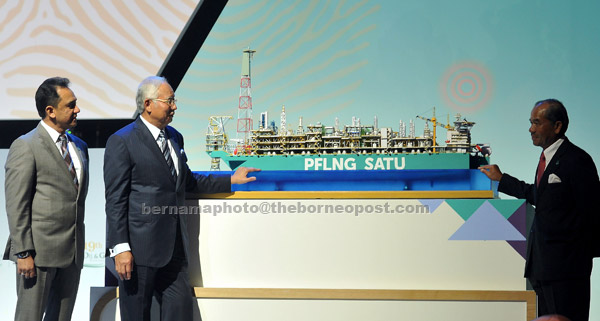 He said now is the right time to encourage the adoption of natural gas in new markets as prices have become attractive, aided by the right investment in infrastructure.

“I am hopeful that companies and governments can form ‘smart’ partnerships to unlock the full potential of natural gas as a viable option, which makes both commercial and environmental sense.

“It is important that we see these two motives as supporting one another, not being in opposition,”  he said in his keynote address at the 19th Asia Oil and Gas Conference yesterday.

He said oil & gas companies can also help push the technological envelope to reduce the amount of greenhouse gas emitted during industry processes.

“I understand, there have been some strides taken in the development of carbon dioxide (CO2) management technologies, including by Petronas. I hope more can be done to achieve a quantum leap in improving and deploying these technologies,” he said.

Najib said the abundance of gas discoveries had helped spur growth of the liquefied natural gas (LNG) industry in the Middle East, the Asia Pacific and Australia.

“The emergence of more producers, increased supplies and competitive gas prices has transformed LNG into an attractive energy resource for emerging economies, and one that also had the benefit of being far less carbon intensive.

“I strongly believe that industry players can collaborate to support the wider adoption of LNG by offering innovative commercial solutions and technical assistance to nations with a fledgling interest in this sector,” he said.

He said the International Energy Agency (IEA) had predicted that global energy demand would double by 2050, not least because of a rising global population, and legacy industry players need to work harder and realign  strategic priorities to remain relevant and sustainable in the long run.

Najib said the oil and gas industry continued to be on the leading edge in adopting new technologies to raise efficiency and productivity.

“With the rise of the Internet of Things, the increasing use of big data analytics and automation, the industry will be able to deliver more energy resources at better prices,” he  added.

He said against the backdrop of these new realities and approaches being adopted by leading players, Malaysia’s economy continued to thrive despite headwinds.

“Last year we recorded growth of 4.2 per cent.  The economy, this year, is projected to grow between 4.3 and 4.8 per cent, supported by healthy domestic demand and robust private sector investment,” he added.

Najib said gross exports are expected to accelerate at a faster pace of 2.7 per cent due to a rebound in the export of commodities and with strong demand for electronics and electrical products, it is expected to spur the manufacturing sector.

Najib said under the government’s Economic Transformation Programme (ETP), the energy sector is set to register annual growth of five per cent up to 2020, transforming Malaysia into a regional oil trading and storage hub and ensuring long-term energy supply security to the domestic market.

“This clearly positions the oil & gas industry as one of the biggest drivers of the ETP. This investment also makes Saudi Aramco the single largest investor in the country so far,” he said.

He said PFLNG Satu is a game changer for the industry, bringing together the liquefaction, production, storage and offloading processes of LNG to an offshore gas field.

“We are proud that Petronas has developed this technology, which will maintain the company’s technical edge as a key global LNG supplier,” he added.

Themed, “New Reality-Driving a New Approach”, the two-day conference brings together eminent industry leaders, policymakers and delegates from around the world. — Bernama