Thursday, August 18
You are at:Home»News»Sarawak»MPS promotes sustainable use of peat, peatlands 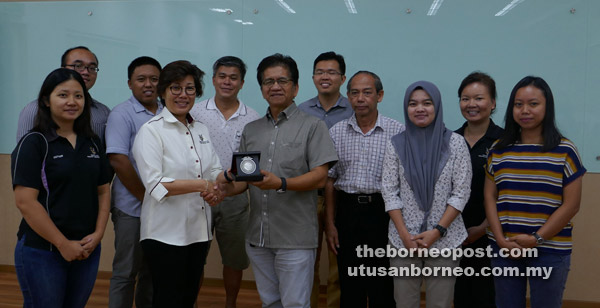 Lulie (front second left) presents a memento to Frederick in the presence of other MPS office-bearers after the AGM.

KUCHING: Sarawak is the last frontier as far as oil palm development in Malaysia is concerned as it is contributing more than 25 per cent to total palm oil output in the country.

According to Malaysian Peat Society (MPS) president Dr Lulie Melling, MPS plays a crucial role in promoting the wise and sustainable use of peat and peatlands in the country, which is part of its objectives.

“As such, MPS will work closely with the government to support both the oil palm industry and the state’s interest. We wish to highlight that Sarawak has been very successful in its management of tropical peatlands both for conservation and development.

“This is seen in the success story of Sarawak being spared from the peat fire disaster caused by El Nino two years ago,” she said after the MPS annual general meeting (AGM) here yesterday.

Moreover, she said MPS had been stressing on the need for research and development (R&D) in the oil palm industry to increase productivity and, consequently, ensure higher income for local farmers.

“As such, oil palm will continue to play an important role in the state’s economy,” she stressed.

MPS outgoing president Frederick Haili Teck, in his speech, congratulated Lulie for MPS’ success in organising the 15th International Peat Congress (IPC) 2016 here where she was the congress-general.

He pointed out that as a newly-established non-governmental organisation (NGO), MPS had created history of sort through its ability to organise the IPC 2016, which gathered more than 1,000 peatland scientists and industrial partners from around the world.

The congress covered all aspects of peatland ecosystems and their management with focus on the environment, societal and economic challenges associated with the contemporary large scale agricultural conversion of tropical peat.

On a related issue, Lulie said one of MPS’ activities for this year would be to attend the ‘Annual Assembly of International Peat Society’ at Aberdeen in Scotland end of this month.

“This is to foster national and international cooperation in advancing knowledge and understanding in the scientific and technical aspects on wise and sustainable use and peat and peatlands, especially in relation to the environment, economy and society,” she said.

At the AGM yesterday, Lulie was elected new president for the 2017-2019 term. 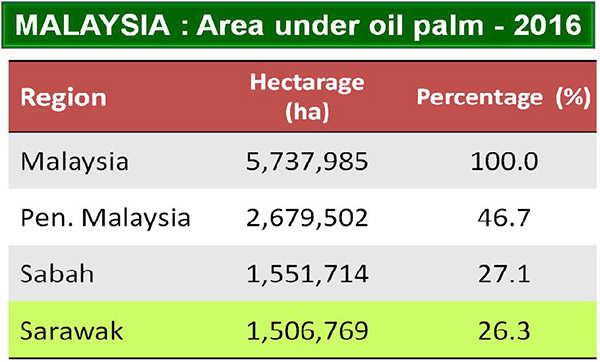 Graphic data from Malaysian Palm Oil Board (MPOB) website shows the percentage of areas with oil palms against the hectares of peatlands in Malaysia. 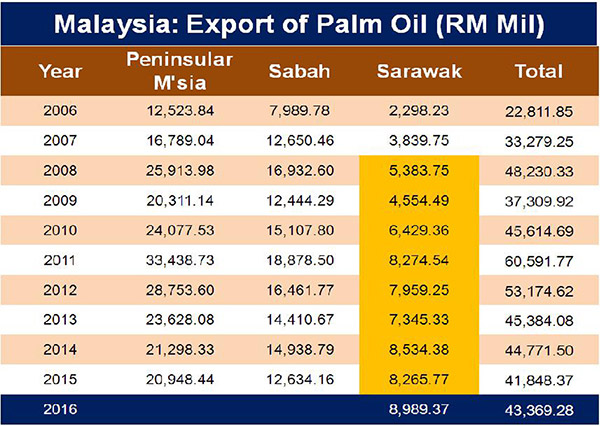 Another graphic data from www.mpob.gov.my shows exports of palm oil by Malaysia in 2016.