Saturday, September 18
You are at:Home»News»Sarawak»CM committed to Internet connectivity devt 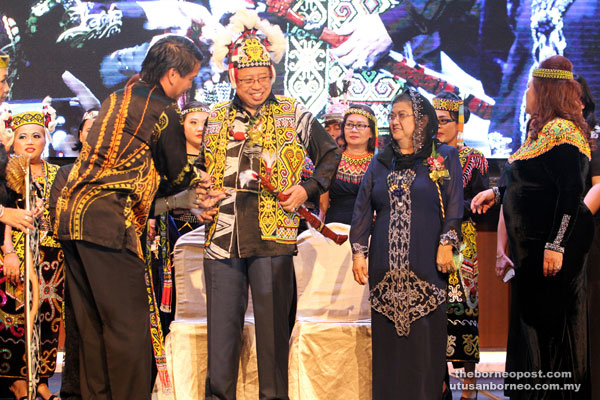 Dennis (left) presents a shield and parang to Abang Johari. 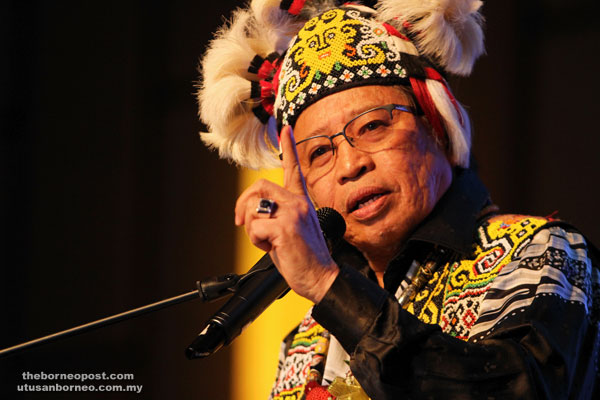 Abang Johari sports a Kayan headgear. — Photos by Chimon Upon

KUCHING: Chief Minister Datuk Amar Abang Johari Tun Openg said he will look for another RM1 billion if the first RM1 billion he pledged earlier is not enough to finance development of Internet connectivity in Sarawak.

“I will not stop to get this Internet connectivity throughout Sarawak realised. So let me be your Internet warrior,” he said in what appeared to be a counter statement against his critics and those cynical about his ICT development plan.

He said high and real time speed in Internet connection was also needed in the rural area and once people were connected via Internet they may be able to share a wealth of information effectively.

He also did not fail to remind the diners of the state’s other major plans including the setting up of RM30 million digital village to produce young technopreneurs and the Highland Development Agency to tap the rich biodiversity resources and elevate the socio-economic status of the rural people.

The Kayans, like the Penans, are traditionally well versed with the rich and useful biodiversity resources in the highland areas, Abang Johari said, and urged the community to aggressively participate in the eco- tourism, modern agriculture and medicinal sectors.

All these could be facilitated by the usage of the Internet and videography to enhance the local economy, he added.

It is imperative for the state to leapfrog from traditional  to digital economy to keep abreast with the rest of the world.

Abang Johari said as long as the people master the knowledge of digital technology they would be in the forefront of almost everything including economic competition.

“Digital knowledge is not based on race and it is colour blind. We, in the state Cabinet, will focus on developing research and development in digital economy as well as biodiversity,” he said.

He likened racial harmony and unity in the state to water flowing through rivers and their tributaries before it converges on the blue sea.

“That is Sarawak,” he said of unity in diversity, a concept successfully practised by Sarawakians.

He was also proud to note that Sarawak was now given more say in the development of oil and gas sector and this was manifested in the state having a 100 per cent yet-to -be-built Sarawak-owned methanol plant.

He also promised to appoint an Orang Ulu temenggong in Kuching as the community has a relatively large population here but he did not disclose which ethnic group the leader would come from.

They also need a temporary hostel to cater for Kayans coming here from the interior of Baram, Tubau and Belaga especially when they accompany their family members and relatives seeking treatment and recuperating at various hospitals here.

Telang Usan assemblyman Dennis Ngau, who is also Persatuan Kayan Sarawak president, said the 100,000-odd Kayans were very much pro-government and would like to work closely with other races in Sarawak in nation-building.

Pesta Lunau Kayan, very much like Gawai Dayak, is a thanksgiving of sorts for the bountiful harvest and a platform to foster relationship among members.

Among the  activities held during the dinner were the Keligit beauty contest and poetry recital.