Tuesday, December 7
You are at:Home»News»Sarawak»MRC members greening the environment 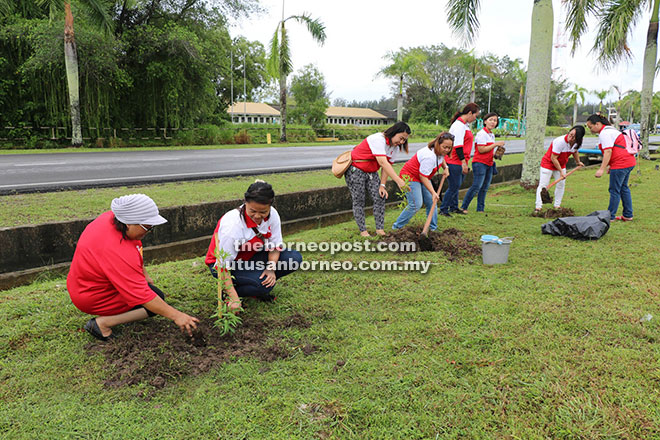 MRC members from the Sunflower Centre planting trees at the plot assigned to them.

MIRI: Malaysian Red Crescent (MRC) members in Sarawak, Sabah and Federal Territory of Labuan target to plant 100,000 trees in the next two years, as an on-going initiative to mitigate disaster risk arising from the impact of climate change.

“We hope to plant 100,000 trees and I don’t know how soon we can achieve that but hopefully within a year or two and after that we celebrate and then plant again and maybe the next target is 500,000 trees,” he said on Saturdayat the launch of the MRCS Tree Planting Project at the open space fronting New World Supermarket in Lutong.

Dr Chan stressed although the effort to plant 100,000 trees was very minimal it augured well in complementing the world’s efforts to replace the 10 billion trees being destroyed yearly.

“Today is a good start of your response, after all climate change affects all of us and we have to think of the needs of our future generations.

“You should take ownership on anything that affects climate change and make sure we do our little part being part of the seven billion world population,” he said, stressing that the project should be sustainable and everyone including the local councils must be involved.

Citing story of a German boy Felix Finkbeine who planted trees from the age of nine and today at the age of 19 or within 10 years, he helped in organising planting of 14 billion trees, surpassing the one-billon trees target of the United Nation, for the period.

Thus, Dr. Chan said with integrated and sustainable efforts the people in Sarawak, Sabah and Federal Territory of Labuan too can also excel in tree planting to increase the current number of three trillion trees in the world, and to make sure there is enough trees to get rid of carbon dioxide, Co2 released by greenhouse gases.

He pointed out that with less Co2 and toxic polluting the environment there will be plenty of oxygen – important for good health.

Meanwhile Lee in his speech also stressed the importance of joining the world’s efforts of addressing climatic change to prevent it from worsening.

“We are facing climatic change and it affects everyone and it can get worst if we don’t know about it and even here in Miri were are facing it and every year we have haze and flood and if we don’t do something about it , it will get worse and this tree planting project is one way of greening our environment and make us healthy,” he said.

Besides, he said trees give out oxygen, provides shades, protection and act as barrier when there are strong winds.

During the event, a total of 333 trees of various species were planted by 200 members from the various units of MRC Miri chapter and representatives from Labuan and Sabah.