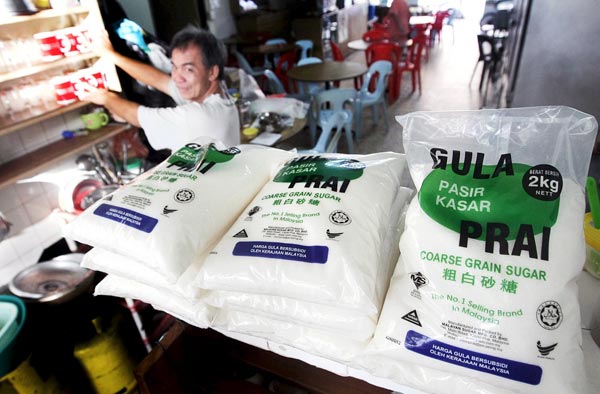 No price increase for sugar despite request by manufacturer. File photo

PUTRAJAYA: The government will not increase the price of sugar despite the request made by one on the country’s major sugar manufacturers for it to do so.

Domestic Trade, Cooperatives and Consumerism Minister, Datuk Seri Hamzah Zainuddin said this was because the government had only recently, in March, raised sugar price by 11 sen while the world market price of the commodity had dropped.

He said the government had raised the sugar price at the time because the global market price then was at US22 cents to US23 cents per pound.

Hamzah was responding to the request made by local sugar producer MSM Malaysia Holdings Bhd to raise the rice of sugar by 29 sen per kg when met by reporters at  the ministry’s monthly assembly here today.

The minister said the top management of MSM Malaysia including its chief executive officer had met up with him recently to discuss the matter.

“I told them firmly that the price of sugar could not be increased unless the company has made a big loss.

“But MSM Malaysia has recorded making profits, hence it is unfair for the government to allow sugar price to be raised to enable the company to double its profit,” he said.

At the assembly, Hamzah also launched the ‘#janganlebihlebih menjelang sambutan bulan Ramadan dan Aidilfitri’ video campaign to create awareness among consumers not to overspend or waste, but to spend moderately.

The minister also witnessed the signing of a memorandum of understanding between the Malaysia Cooperative College and Skills Development Department to boost managing of cooperatives in this country. – Bernama