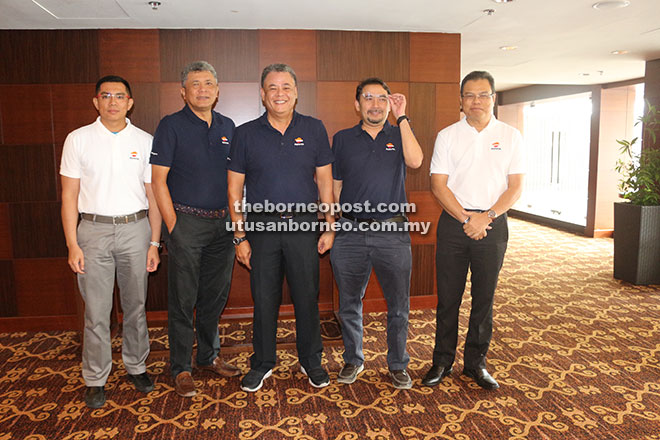 The two projects are within the last legs of their Engineering, Procurement and Construction (EPC) phases which are carried out by OceanMight Sdn Bhd (OMSB), an affiliate of local-based KKB Egineering Bhd, and are scheduled to be completed in the second quarter of financial year 2017 (2QFY17) for the Kinabalu redevelopment project and 3QFY17 for the Bunga Pakma development project.

The Kinabalu redevelopment project entails the construction of a 3,700-tonne wellhead riser platform and a 350-tonne bridge that would link the new facilities to the existing Kinabalu platform owned by Repsol.

According to its project engineer Mohd Khari Yusoff, Kinabalu’s jacket has just been completed and is already en route to its installation site – 54km off the coast of Labuan.

“The topside is nearly completed as well and is schedule to start its transportation to the site this Friday (May 26).

It is estimated to arrive in two to three days and T&I activities are expected begin early next week,” Khari said during a project update session yesterday.

The new oil platform’s purpose is to supplement the current oil production at the Kinabalu site and is expected to add an incremental production of 7,000 barrels of oil per day.

“We expect to see first oil during 3QFY17,” guided Khari who added that the timing of Kinabalu transitioning into its T&I phase is optimal due to current forecast of calm seas and weather.

Timing for Bunga Pakma, on the other hand, is less optimal as its project manager, Asrul Rahim Abdul Haidi said there is chance that its T&I activities might be delayed.

“While we are on target, if the fabrication process taking place right is prolonged, we might be not be able to move into installation straight away due to the monsoon season.”

Despite, the potential setback, Asrul praised OMSB for their expertise during the EPC phase, admitting that he had been wary in the beginning that the group might not be able to handle the alternative piping material of Bunga Pakma.

“As the site (Bunga Pakma) is located in an environment with a high CO2 levels, we used duplex piping which is harder to handle, instead to combat corrosion,” he explained.

Nevertheless, Asrul noted that for now, Bunga Pakma is on schedule to start its T&I phase in 3QFY17 and see first oil by May 2018.

Both T&I contracts for both platforms will be undertaken by SapuraKencana Petroleum Bhd (Skpetro).

Meanwhile, Asrul highlighted that one of Bunga Pakma’s contract awards has yet to be confirmed.

“Right now the Hook-up contract for Bunga Pakma is in its tendering process but we are expecting an announcement fairly quickly on the award as all of its on-shore activities is expected to be completed by August.” Looking forward, stakeholder relations manager of Repsol’s Malaysia Business Unit Farid Jaafar announced that Repsol would definitely be open to the idea of increased expansion within the state.

“While we have no exploratory activities going right now, we are definitely interested in more opportunities in Sarawak if they arise.

“Right now we are working on what we already have but there is still plenty of time to discover new opportunities,” said Farid.