Monday, January 24
You are at:Home»News»Sarawak»Peninsula states asked to give East Malaysians time off for festivals 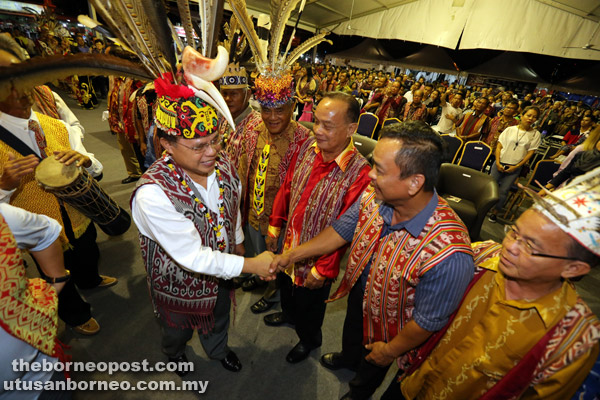 Entulu is greeted by Dayak community leaders upon his arrival for the event.

KUCHING: States in the peninsula have been asked to give Sarawakians and Sabahans time off for the Gawai Dayak and Kaamatan celebrations.

Minister in the Prime Minister’s Department Datuk Joseph Entulu Belaun said many Sarawakians and Sabahans working in the peninsula have complained about not being able to celebrate the respective harvest festivals.

“Hari Gawai Dayak and Kaamatan are very important festivals for the indigenous people of Sarawak and Sabah. For the indigenous people of the two states, the meaning of the two celebrations is the same as what Chinese New Year is to the Chinese, or Hari Raya to the Malays here in this country,” he said when closing the Gawai Dayak Festival at MJC Batu Kawah New Township on Friday.

“If the peninsula state governments allocate a rest day for all Sarawakians and Sabahans who observe Hari Gawai Dayak and Hari Kaamatan, I am sure all the private companies will understand how important the two festive occasions are for the people of Sarawak and Sabah. They will feel appreciated too.”

Entulu said while not all states in Peninsular Malaysia may be able to implement this, he suggested those with significant numbers of Sarawakians and Sabahans do so first.

Among those present at the ceremony were Deputy Home Minister Datuk Masir Kujat and Bukit Begunan assemblyman Datuk Mong Dagang.

In Sarawak, Gawai Dayak has been gazetted a public holiday since June 1, 1965.

In Sabah, the Kaamatan public holiday falls on May 30-31.