Saturday, October 1
You are at:Home»News»Sarawak»Exemption of cabotage policy a business booster 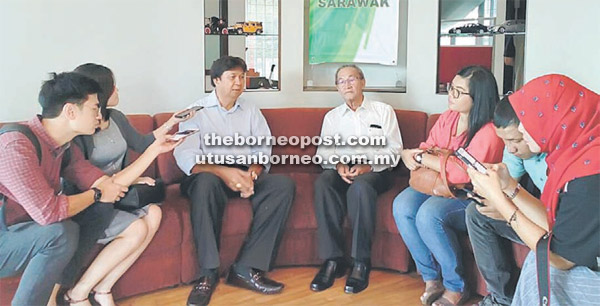 Abang Khalid (centre) speaks to the press after the handover of contributions. On his left is Pekema Sarawak committee member Adenan Esmit. — Photos by Jeffery Mostapa

Its chairman Datuk Abang Khalid Tan Sri Datuk Amar Abang Marzuki said the exemption of the policy would reduce cost as it avoids double handling so cars will be cheaper.

“We are hopeful this year will be a good one. Cars will be cheaper as we don’t need to pay extra shipping costs. It’s a good move by our Chief Minister Datuk Amar Abang Johari Tun Openg to propose the abolishment of the policy although certain quarters are not happy with it,” he told the press after handing over hampers and cash to 70 underprivileged people at Pekema’s headquarters at Green Road yesterday.

Sarawak government had proposed to the federal government to abolish the cabotage policy, which calls for all goods to the state to pass through Port Klang.

On May 7, Prime Minister Datuk Seri Najib Tun Razak announced the abolishment of the cabotage policy for Sabah, Sarawak and Labuan starting June 1.

Najib said leaders from Sabah and Sarawak have been continuously requesting for the policy to be reviewed as it caused high prices of goods in both states.

However, the policy would still be applicable to cargo shipping operations within Sabah, Sarawak and Labuan.

The cabotage policy enforced 30 years ago in Sabah, Sarawak and Labuan functions to control goods shipped from the peninsula to Sabah and Sarawak.

Earlier, Abang Khalid said the handover of the hampers and cash was Pekema’s contribution to the needy in conjunction with Gawai Dayak celebration, which was part of the association’s corporate social responsibility this year.

He said similar contributions were given to less fortunate people during other festivities like Chinese New Year, Hari Raya Aidilfitri and Christmas.

“We have around 70 recipients from Siburan, Siol Kandis and Semerah Padi today (yesterday). We hope to bring some joy to the recipients during the Gawai Dayak celebration. We will do some more charity during the ‘Ngiling Tikai’ in June, as well as extend more charity events to other parts of Sarawak including Sibu and Miri,” he said