Tuesday, January 25
You are at:Home»News»Sarawak»Malaysia regrets US withdrawal 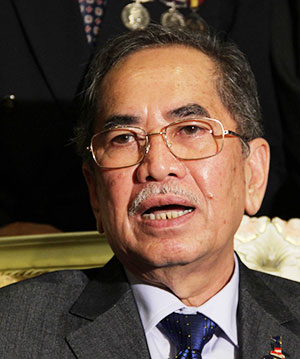 KUCHING: Malaysia has expressed profound regret and deep concern with the United States of America’s decision to withdraw from the Paris Agreement.

Minister of Natural Resources and Environment Dato Sri Wan Junaidi Tuanku Jaafar pointed out that the current US administration’s actions have effectively reversed the decision of the previous administration causing a serious set-back to hard-won compromises made by all parties to enhance the full and effective implementation of the United Nations Framework Convention on Climate Change (UNFCCC).

“As the second-largest emitter of greenhouse gases globally at 18 per cent, and with a per-capita emissions level that far exceeds the global average, the US has a moral obligation to continue taking the lead in addressing climate change and its numerous impacts at the global scale,” Wan Junaidi said in a press statement yesterday.

“Having ratified the Paris Agreement, which itself embodies the spirit of continuous progression and no backtracking, the action by the US calls into question the sincerity and good faith on which all multilateral agreements are negotiated and agreed.”

Wan Junaidi pointed out that climate change will only worsen if the world regresses to inefficient and carbon-intensive ways.

“Therefore, as a significant global contributor to climate action, the withdrawal by the US also represents a serious curtailment of the needed means of implementation for developing countries to enhance adaptation measures and mitigation actions,” he said.

“Furthermore, the loss of US support will impede efforts by developing countries to build the needed capacity to undertake these actions and to enhance transparency of reporting on the achievement of their NDCs (nationally determined contributions).”

Wan Junaidi assured that Malaysia remains committed to achieving the objectives of the Convention and its Paris Agreement.

He said in spite of their minimal responsibility for historic emissions, all developing countries have agreed under the Paris Agreement to contribute to actions to reduce the current and future impacts of climate change by submitting and implementing NDCs.

In the same way, all developing countries remain committed to ensuring transparency of actions and support as well as to facilitating and promoting compliance as clearly laid out in the Paris Agreement.

“Having committed ourselves to the spirit and letter of the Paris Agreement, Malaysia fully aspires to tracking, reporting, and achieving the intensity targets expressed in its nationally determined contribution,” he said.

Malaysia called on all governments to persevere in their efforts to adopt low-carbon and sustainable development paradigms.

“In this regard, Malaysia appreciates, in particular, the sacrifices and concessions made by both developed and developing countries in agreeing and ratifying the Paris Agreement,” he said.

The world’s most vulnerable, already impacted by increasingly frequent and severe extreme weather events, can no longer tolerate petulant attitudes and retrogressive decisions, he said.

“Malaysia remains hopeful that the US administration, in aspiring to become ‘the cleanest country in the world’, will continue to support the consensus on the implementation of the Paris Agreement as the only viable way forward to address the climate crisis,” he added.