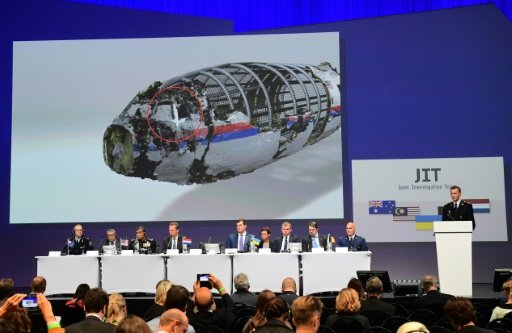 Relatives of those killed aboard flight MH17, downed over Ukraine in 2014, may view images of passengers boarding the doomed plane, investigators and a victims’ foundation have agreed. AFP photo

THE HAGUE: Relatives of those killed when flight MH17 was downed over Ukraine in mid-2014 were given the green light Thursday to view final images of victims as they boarded the ill-fated flight.

Dutch investigators and a victims’ foundation reached an agreement to view CCTV camera footage taken at Amsterdam’s Schiphol airport on July 17, 2014, hours before the plane took off.

The Malaysia Airlines Boeing 777 passenger jet was shot down over eastern Ukraine on the same day en route to Kuala Lumpur killing all 298 on board, most of them Dutch citizens.

“We told relatives yesterday that we’ve reached an agreement with the public prosector’s office to view these images,” said Evert van Zijtveld, chairman of the MH17 victims’ foundation.

He said investigators and relatives first had to clear issues with Dutch privacy laws before the go-ahead could be given — including that relatives were to sign a oath of secrecy.

The video images were taken by 34 security cameras at Schiphol’s departures hall and lounge between the hours of 0200 GMT and 1200 GMT.

“These are incredibly important images. They are the very last images of the victims,” said Van Zijtveld, who lost a son, daughter and his parents-in-law.

“Viewing these images helps in the mourning process,” he told AFP.

Dutch Safety and Justice Ministry spokeswoman Sentina van der Meer said it was not yet clear when the relatives will gather for the viewing.

“But our aim is to give relatives more clarity before the next MH17 commemoration on July 17,” she said.

A Dutch-led criminal investigation into the attack concluded in September last year that a BUK missile, transported from Russia, was fired from a field in a part of war-torn Ukraine then controlled by pro-Russian rebels, and hit the plane.

But it stopped short of saying who pulled the trigger.

The Dutch-led investigation did not directly accuse Moscow of supplying the BUK missile and its transporter system — and the Russian government has repeatedly denied any involvement.

The incident came at the most heated point in the war, straining tensions between the West and Moscow even further. – AFP