Friday, May 20
You are at:Home»News»Sarawak»Golden Anniversary Bridge to be completed on schedule 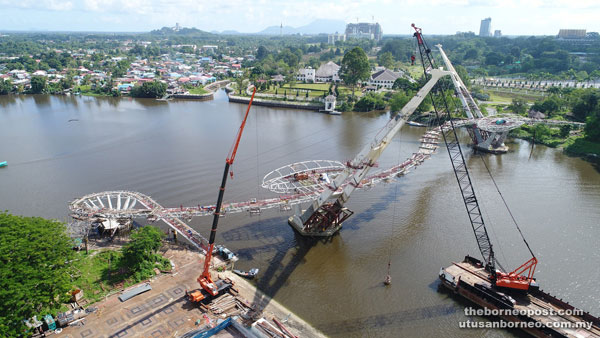 Another aerial view of the 330m structure. 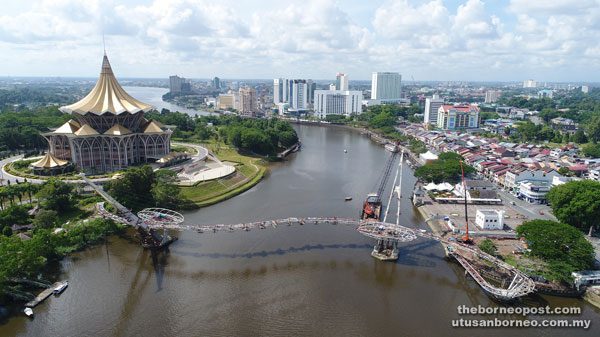 The latest aerial view of the bridge, where works are on-going. 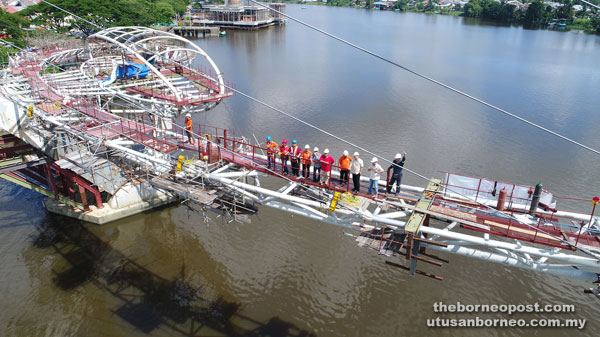 NEARING COMPLETION: The construction team stand on a platform above the newly installed segments of the steel walkway of the Golden Anniversary Bridge over Sarawak River. It is set for completion before year-end.

KUCHING: The Golden Anniversary Bridge project is set for completion as scheduled before this year’s end, following the successful joining of the last segments of the steel walkway at the Sarawak River Waterfront yesterday, which connects the city’s north and south areas.

This joining of the segments is a major milestone in the construction of the bridge, which is a joint venture between PPES Works (Sarawak) Sdn Bhd and Naim Land Sdn Bhd as the contractors, and the state government and Sarawak Economic Development Corporation (SEDC).

“It represents the dynamism and growth of Sarawak into a progressive and rapidly-developing state, with an upwardly mobile diverse population and a thriving tourism industry.

“Therefore, it is highly appropriate that today’s landmark, bringing together both sides of the river, coincides with the upcoming Hari Raya Eid Aidilfitri celebrations – a global and statewide symbol of unity, community and thanksgiving,” he said.

The Golden Anniversary Bridge Project was awarded on Dec 20, 2013 on a turnkey (design-and-build) basis to PPES Works (Sarawak)-Naim Land joint-venture (JV) and is scheduled for completion before the end of this year.

Upon completion, this unique curved 330m pedestrian bridge would be supported by cables from two 4m and 48-degree outward angled steel towers topped out with stylised hornbills.

In addition, the two covered viewing platforms would provide pedestrians with resting spots, complete with panoramic views across the city’s heritage focal points.

As well as being both functional and convenient, the bridge would provide easy access for residents, commuters and tourists from Kuching Waterfront on the Southern Bank to the Sarawak Legislative Assembly (DUN) Complex, Orchid Garden and Fort Margherita on the Northern Bank.

The bridge would also become an integral part of the planned Legacy Park and Halaman Heritage Trail.

The Golden Anniversary Bridge is designed exclusively for pedestrians, including the disabled, with easily manageable gentle gradients for smooth ascent and descent. Motorised traffic of any kind is therefore prohibited for safety reasons.