Thursday, October 28
You are at:Home»World»Funeral to be held for US student imprisoned by N. Korea 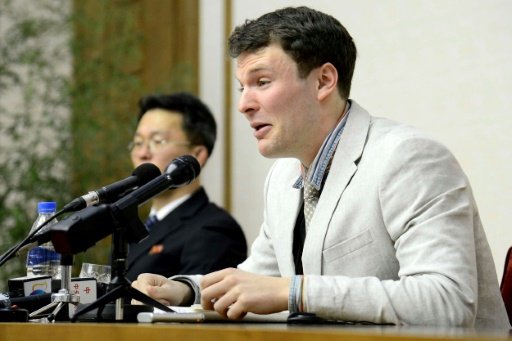 Otto Warmbier’s funeral will be held at Wyoming High School — located in the city of Wyoming, a suburb of Cincinnati — from which he graduated in 2013. AFP Photo

CHICAGO: Otto Warmbier, the US college student imprisoned for more than a year by North Korea and sent back home in a coma that proved fatal, will be buried Thursday in his home state of Ohio.

Sentenced to hard labor for stealing a political poster from a North Korean hotel, the 22-year-old Warmbier was medically evacuated in a coma last week after nearly 18 months in captivity.

Warmbier’s funeral will be held at Wyoming High School — located in the city of Wyoming, a suburb of Cincinnati — from which he graduated in 2013. He will then be buried in Cincinnati’s Oak Hill Cemetery.

Blue and white ribbons, the colors of the high school, were still tied to trees in the city of about 8,000 to show of support for Warmbier’s family after Otto’s recent return.

Warmbier’s father Fred earlier told reporters that his son was lured to North Korea, as other US tourists have been, by tour groups run out of China.

“Otto’s a young, thrill-seeking, great kid who was going to be in that part of the world for a college experience and said, ‘Hey, I’ve heard some friends who have done this. I would like to do this.’ So, we agreed to let him do that,” Fred Warmbier said.

“They lure Americans, and then they take them hostage and then they do things to them, and that’s what happened to my son,” he added.

Warmbier was arrested as he was about to leave North Korea and sentenced in March 2016 to 15 years of hard labor. Soon after his family heard nothing more about his fate

Then, just before he was to be medically evacuated, the North Korean regime revealed that Warmbier had been in a coma for much of his imprisonment.

Warmbier died Monday of severe brain damage, which doctors said was likely due to cardiopulmonary arrest.

Medical tests did not show what precipitated his injuries, but also found no evidence of the botulism infection that North Korea claimed was the cause of his coma.

The Hamilton County Coroner’s office did not perform an autopsy at the request of the Warmbier family.

Warmbier’s friends and relatives described him as a bright young man beloved in his community.

“He just lived life with such a zest and a passion that I haven’t really ever experienced in somebody before,” Warmbier’s childhood friend Chris Colloton told the Cincinnati Inquirer newspaper.

In a statement announcing his death, Warmbier’s family described him as “a warm, engaging, brilliant young man whose curiosity and enthusiasm for life knew no bounds.”

“You can tell from the outpouring of emotion from the communities that he touched –- Wyoming, Ohio and the University of Virginia to name just two -– that the love for Otto went well beyond his immediate family,” the statement said.

Following Warmbier’s death, the tour group that arranged his trip said it would no longer take Americans to North Korea.

“Now, the assessment of risk for Americans visiting North Korea has become too high,” said the China-based Young Pioneer Tours.

US Secretary of State Rex Tillerson warned that Washington holds North Korea “accountable” for Warmbier’s fate, and demanded the release of three other Americans held by the reclusive regime.

Secretary of Defense Jim Mattis said that US patience with Pyongyang is running out.

“To see a young man go over there healthy and, (after) a minor act of mischief, come home dead basically… this goes beyond any kind of understanding of law and order, of humanity, of responsibility towards any human being,” Mattis said. – AFP