Wednesday, July 6
You are at:Home»News»Sarawak»Clamour for road link 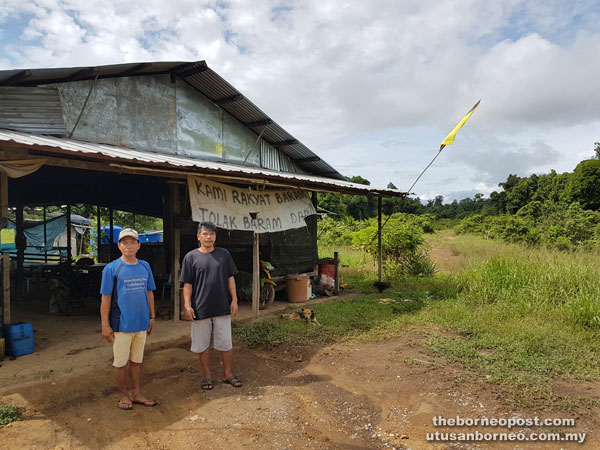 Two villagers are seen manning a blockade at the starting point of Long Lama-Ulu Baram road.

KUCHING: The people of Baram want the government to build the Long Lama-Ulu Baram road although the Baram HEP project is scrapped.

“Now that the HEP Dam project has been scrapped, I am working hard to get the road built as this is what locals want,” Dennis said when contacted yesterday.

He said the road project had actually commenced for a few metres but stopped due to road blockade by several locals.

“I don’t know why these people set up the blockade to stop the construction of the road. However, since the majority of the people want the road, I am still promoting it.

“I am putting in more effort to ask the government to build the road. The government does not have to go through the ‘blockade area’ but use an alternative route to link Long Lama to Ulu Baram,” he suggested.

He said he had heard about the government moving away the RM700 million allocated for the road to finance other projects ‘but there has been no document indicating such a move’.

“So I assume it is just a rumour. We hope the government will continue to build the road by using an alternative link,” said Dennis.

He said this in response to a story in The Borneo Post yesterday entitled ‘Almost all roads in upper Rajang, Upper

Baleh to be completed by 2030’ which reported Deputy Chief Minister Tan Sri Dr James Masing as saying the RM700 million allocated for the Long Lama-Ulu Baram road had been used to build a road linking Mujong Bridge to the proposed Baleh HEP Dam in Putai.

In the recent road trip of Borneo Post Adventure Team (BAT7) from Jun 5 to 18, the team found out from locals that many villagers were still continuing with the road blockade because there was no letter of assurance from the state government stating the scrapping of the Baram HEP project. The villagers told BAT7 that the blockade was to stop the building of the dam but not the road.

“We continue with the blockade because the government did not put down in black-and-white the abandonment of the Baram HEP project. We hope the government would not jump to the wrong conclusion by putting two and two together. The blockade is to stop building of the dam but not the road,” said the villagers.

The state government, under the late Datuk Patinggi Tan Sri Adenan Satem, had agreed to drop the Baram HEP project due to strong resistance from many locals.