Friday, May 20
You are at:Home»News»Sarawak»Painted ceiling panels back on display at Old Courthouse 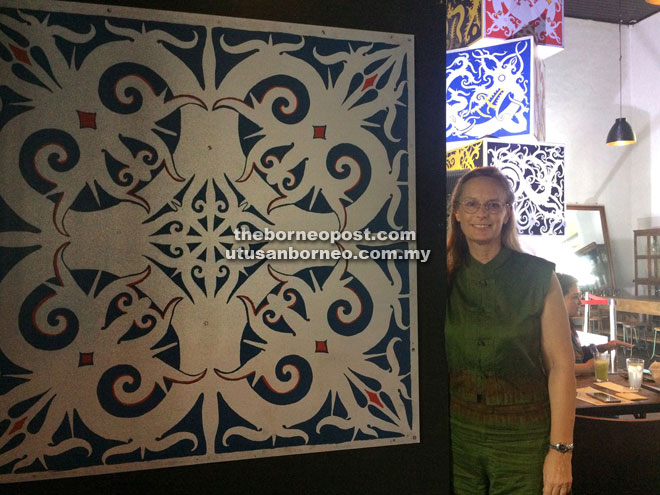 Macul with a piece entitled ‘chelou bechoap’ or ‘root of the pitcher plant’ by Surang Tiong. In the background is a tower of assorted paintings.

KUCHING: Those of us who had not entered the courtroom in the Old Courthouse for any reason between 1955 and 2004 will not know about the painted ceiling panels comprising pieces of ethnic artwork done by seven Berawan artists from Long Jegan.

After their removal for a restoration project between 2002 and 2004, the panels ended up in a dusty corner somewhere on the premises until a lawyer asked Friends of Sarawak Museum (FoSM) executive director Louise Macul what had happened to them. This triggered a search for these paintings.

Macul and a Sarawak Museum staff were able to find 40 of them though the full number remain unknown. These original pieces were documented, and digital images used to create replicas of the actual sizes.

These pieces, originally commissioned by Sarawak Museum back in 1955, are back in the courtroom, although not back on the ceiling during 50 years of court proceedings.

What was once a courtroom is now known as Kopi-C at the Old Courthouse, and is a venue for the Rainforest Fringe Festival 2017, running from July 7 to 15.

According to Macul who met The Borneo Post, she and Dora went to Long Jegan to visit two of the remaining artists – Surang Tiong and Seladau Penying.

“The information and stories they told us were used for the information in the text panels accompanying some of the pieces but we still don’t understand the value of the paintings to the people who made them,” Macul said.

Eight pieces are displayed on partition walls in Kopi-C, complete with a story about each piece.

A number of other pieces were assembled into a tower, reminiscent of a totem pole. These are displayed without explanation in the manner in which they were originally presented.