Friday, May 20
You are at:Home»News»Sarawak»‘A Taste of Sibu’ book launched in conjunction with VSY 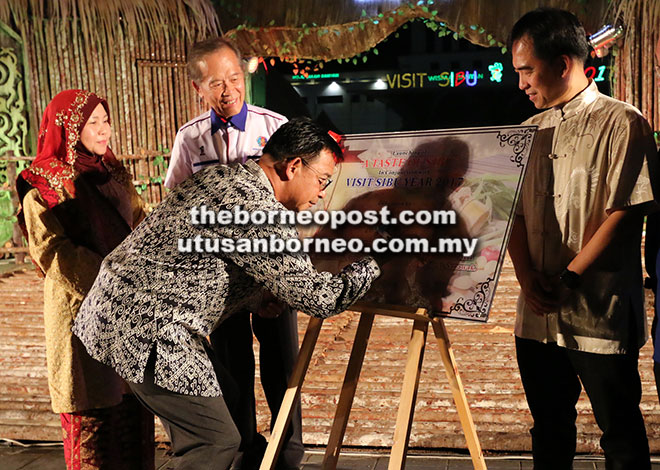 Abdul Karim signs a board to launch the book while (from left) Rogayah, Tiong and Hii look on.

SIBU: A book entitled ‘A Taste of Sibu’ was launched Thursday evening at Sibu Town Square where the Borneo Cultural Festival (BCF) is currently taking place.

“The uniqueness of this book is that it shows the unity among the races in Sibu.  Starting with the effort of producing this book where the three associations came together to make things happen.

“The book itself represents One Malaysia,” said Chieng who is also a councilor of Sibu Municipal Council.

According to him, dishes featured in the book are recommended by the three associations.

The content is in four categories – Chinese, local, Malay-Melanau and Dayak.

Apart from cuisines and delicacies, other features include tropical fish and fruits.

It is in three languages – English, Malay and Chinese.

The book, priced at RM30 each, is available at Tradex Information Centre at Town Square Tower 1 (near Chinese pavilion) and Sibu UTC adjacent to the Sibu Central Market.