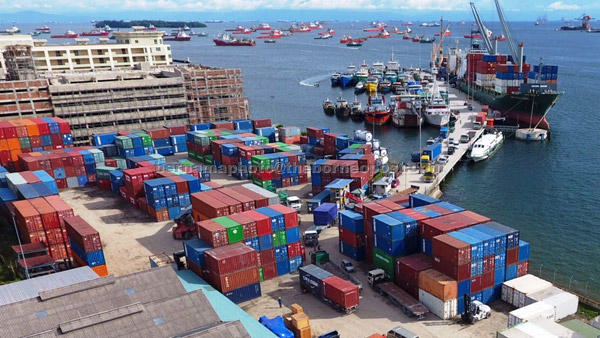 File photo shows container ships docking at a port in Sabah. Despite deterioration in its debt-to-revenue ratio in 2016, Sabah’s cash and investments-to-gross debt ratio was stronger – highlighting the State’s fiscal prudence. — Bernama photo

The rating is based on the Constitution of Malaysia’s requirement that any borrowing by state governments be subject to the approval of the federal government.

In line with its rating criteria and methodology, the ratings agency also analysed Sabah’s economic and budgetary performance, which remains strong and highly supportive of its debt-servicing ability.

“Although RAM does not consider approval by the Federal Government to be a direct guarantee, such an endorsement underscores the government’s implicit support and reflects its role as the lender of last resort in the spirit of the federation,’ it said in a statement yesterday.

“As the bonds had been raised and issued with the approval of the Ministry of Finance, the issue rating reflects that of the Federal Government.”

To note, the Sabah government enjoys a supportive relationship with the country’s current administration.

“In 2016, the federal development allocation to Sabah increased to RM3.1 billion, or 83 per cent of the state’s total development expenditure, and is expected to remain high at RM4.5 billion in 2017,” noted Esther Lai, RAM’s Head of Sovereign Ratings in the statement.

RAM further added the federal government did not provide the state with two special grants in 2016 – RM27.6 million on average from 2011 to 2015 – due to the underperformance of the former’s revenue growth.

“However, our view of its supportive stance towards the state remains, given that the federal government had acted within the provisions of the Constitution.”

It observed that Sabah’s higher revenue adjustment capacity compared to states in Peninsular Malaysia, is another rating positive.

“The Constitution accords Sabah additional revenue sources, which made up 40 per cent of the state’s revenue in 2016 of RM1.5 billion – a 7.7 per cent increase year on year.

“With regard to the recent introduction of the Tourism Tax Bill 2017, the state is still in discussion with the Federal Government on its implementation.”

RAM believed the legislation could complicate the state’s plans to implement heritage or conservation taxes. Nonetheless, the growth momentum of the vibrant tourism sector is expected to be maintained in 2017, with an estimated 3.6 per cent increase in arrivals and tourism receipts amounting to 10 per cent of GDP.

“As total expenditure was streamlined, Sabah’s overall fiscal position improved to a mild surplus of RM33.19 million in 2016.

“Despite deterioration in its debt-to-revenue ratio in 2016, Sabah’s cash and investments-to-gross debt ratio was stronger – highlighting the State’s fiscal prudence.”