Wednesday, October 20
You are at:Home»News»Sarawak»Employers fret over EIS 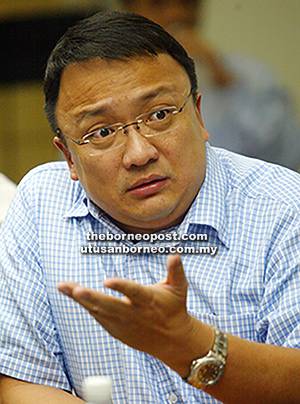 KUCHING: The Kuching Chinese General Chamber of Commerce and Industry (KCGCCI) disagrees that the Employment Insurance Scheme (EIS) will not burden employers in terms of costs.

Its secretary-general Jonathan Chai said under the proposed scheme, employers would have a statutory duty to make contributions and this clearly would increase the cost of operating businesses.

“How could you say that EIS will not increase the operating costs of business when businesses will be required to make contributions every month if the government decides to go ahead with the scheme?

“The remarks of the economist concerned were made on, among others, the assumption that retrenchment of workers happened to pace for automation and upgrading of technology.

“According to the economist, the proposed scheme would make it cheaper for employers to lay off workers in order to upgrade their technology and automate their businesses compared with the current workers’ protection.

“But not all employers who contribute to the scheme will go for upgrading of technology and if any employers intend to do so, they themselves should be the one responsible to deal with the retrenchment of their workers and not from the pool of funds where others are made to pay,” said Chai.

He said this yesterday in response to director of the Social Security Research Centre, Faculty of Economics and Administration, Universiti Malaya Prof Datuk Dr Norma Mansor, who had recently asserted that EIS would not burden employers in terms of costs.

Chai said they “do not want any errant employers to take advantage of the proposed scheme where others are made to suffer, especially when someone is financially capable of upgrading the technology of his or her business.”

He felt that the business concerned should be responsible for dealing with the lay-off benefits of its retrenched workers under the prevailing law.

“Unlike the Employees Provident Fund (EPF), when employees and employers make their contributions to the proposed EIS, employees will only benefit when they are being retrenched.

“Looking at the relatively small percentage of workers retrenched annually in this country, we don’t need a pool of funds serving such purpose at the expense of the private sector,” he pointed out.

Chai said the sizable amount deployed in maintaining the proposed EIS “is self-defeating and contentious”.

“If at all there is any additional protection or benefits required to be given to the retrenched workers, on top of the subsisting benefits provided under the prevailing law and social safety net, the government should be duty-bound to make such arrangements.”

He said there had been a series of policies put in place lately to escalate the costs of running business in the current difficult business environment and deteriorating economy.

“Among the examples are the minimum wages policy and levies on foreign workers. And if the government goes ahead with implementing the proposed EIS, it will definitely be a blow to local businesses, affecting their sustainability or even survival,” he added.

On Saturday, Norma told Bernama that the contributions towards the EIS fund would be made by both employers and employees under the new scheme.

According to her, the proposed EIS would make it cheaper for employers to lay off workers in order to upgrade their technology and automate their businesses compared with the current workers’ protection scheme.

“When we talk about lay-off and the termination benefits, (currently) the responsibility falls on the employers alone and they are supposed to pay an equivalent of 4.5 months of the terminated worker’s salary. And it is only covering workers earning RM2,000 and below.

“The EIS is contributory, where every employee will also have to contribute to the fund. The contribution will go into a pool fund, similar to the EPF, where this fund is going to be invested,” added Norma.

The novel Bill seeks to extend welfare coverage for the country’s 6.5 million private workers by compelling employers to contribute additional payment and bar them from making cuts to wages and fixed perks.

Clause 24(1) of the Bill states: “[The] Employer shall not, solely by reason of his liability for any contributions payable under this Act, directly or indirectly, reduce the wages of any employee, or discontinue or reduce benefits payable to the employee under the conditions of service which are similar to the benefits conferred by this Act except as provided for in any other written law.”

The EIS is primarily aimed at helping provide financial assistance to private workers who lose their jobs until they are able to find new employment.