Saturday, August 20
You are at:Home»News»Sarawak»500 runners expected to converge on Beach Republic Miri for ultra-challenge event 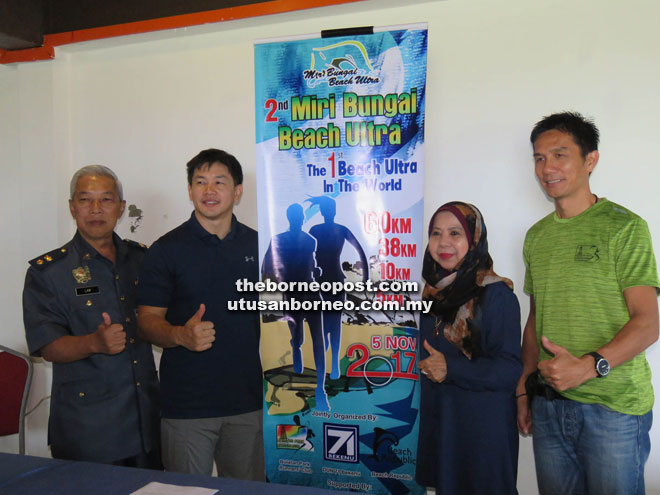 The run, which enters its second edition this year, will cover the routes along the strip at Beach Republic Miri. It will also host four categories – up from only two held last year.

According to Assistant Minister of Women, Family and Childhood Development Rosey Yunus, the run doubles as a tourist attraction and as such, various activities will be arranged to promote local cultures throughout the competition.

“I would like to encourage participants from all walks of life to join this run as we are encouraging healthy living. I hope to see more local and international participants, especially with two more categories added this year.

“Moreover, the participants will indirectly become tourism ambassadors where during the event, they will see the beauty of our place and tell their friends back home about it,” said the Bekenu assemblywoman, who is also advisor to the event, during a press conference at Beach Republic Miri yesterday.

“A Candidate Race is a new race to be evaluated during the first edition – provided that it fulfils the technical criteria of MUL races; if it does, it would become a permanent MUL race and as such, all participating runners would be awarded with MUL points based on the league’s standard-point’s rules.

“In this regard, ultra-runners from Malaysia and elsewhere would have a platform where their efforts and achievements would be acknowledged. Best of all, they just have to register for their races and run to be part of it,” he explained.

The participants for both categories will be asked about this during registration, and they must provide details of their qualifying event including the names and time result.

Further information and forms (for 60km and 38km events) can be obtained online via http://bulatanparkrunnersclub.com/mbu2017/, while forms for the 10km and 5km events are obtainable at Share Tea Miri and the N71 Bekenu Service Centre.