Sunday, April 18
You are at:Home»News»Sabah»Kiulu to develop its mulberry industry 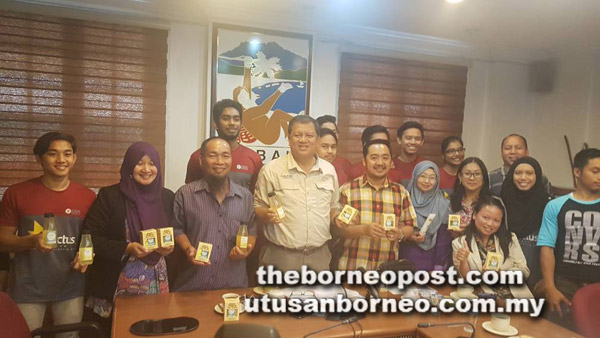 Joniston (fourth right, front row) and Dr Bonaventure (front row, fifth right) promoting the mulberry tea with members from the Kampung Tudan cooperative and UMS students who were involved in the Enactus competition.

He added that the climate and soil condition in Kiulu were suited for mulberry farming.

Presently, mulberry is being planted at Kampung Tudan, an isolated village which is 50 kilometres away from Kiulu.

The project was initiated by students participating in the National Enactus competition that was held in Kuala Lumpur recently. The students won the competition and would be going for the world cup competition which will be held in London next month.

According to a senior director of the University Malaysia Sabah (UMS) Research and Entrepreneurial centre, Dr Bonaventure Boniface during a press conference held at the STB office near here yesterday, the students started the project five months ago and got the involvement of 56 people from the village cooperative.

“We hope STB can help us in marketing the products produced by the villagers,” said Dr Bonaventure.

The proposal to market the products was received positively by STB and Joniston said STB had a marketing body, Sri Pelancongan, which could help promote the product at its network of shops.

“We plan to open more shops in the future,” he said.

He also told members of the cooperative from the village that plans have been made to improve the road from Tudan to Kiulu.

He added that once the road was completed, it would be easier for the  the villagers to market their produce.

The majority of the folk living in the village work as farmers but until recently, they have not been exposed to the true potential of the mulberry plants that are found in their village.

The business of the villagers has also remained stagnant due to the lack of sales channels and communal cooperation among the villagers.

The project, dubbed  the Morus project, has increased the monthly income of the villagers from RM517 per month to RM700.

The project has also brought about better communal cooperation between the villagers through the establishment of the village cooperative and they also have been exposed to business and cultivation management through workshops conducted by Enactus UMS.

In general, the aim of the project is to help the community to improve their living standard and economy.