Wednesday, July 6
You are at:Home»News»Sarawak»Living in accord with nature 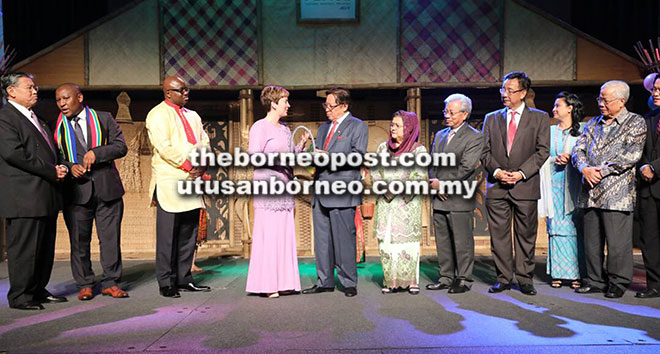 KUCHING: Chief Minister Datuk Amar Abang Johari Tun Openg believes that the condition that can lead to peace and harmony in society may not necessarily be confined to the relation between Sarawak and its neighbours.

Learning from countries like New Zealand, Abang Johari said Sarawak considers the symbiotic existence between the environment and humans as key to bringing about social harmony and stability.

In noting that Sarawak is a land rich in flora and fauna, he said Sarawakians are proud of their rich and diverse environment which they want to preserve and conserve at all cost, for the simple reason that environmental degradation is also capable of creating economic and social uncertainties.

“Unrestrained logging and the resulting destruction of forest and wildlife habitat will but result in the depletion of our natural resources, thus rendering the concept of sustainable development unworkable.

“Without the guarantee of future resources by way of the sustainable development of our resources, the prospect of a bright economic future would seem dim,” he said in his speech during a state dinner held in conjunction with the International Summit of Peace at Borneo Convention Centre Kuching (BCCK) here last night.

Abang Johari said it was for this reason that the state government had instituted the policy that there would be no more timber concessions on state land.

“Short term timber extraction licences are only given for clearing of merchantable timber in areas approved for development purposes. The government has also stopped the issuance of permit for the purpose of setting up large-scale oil palm plantation on government land except for those on Native Customary Rights lands. These steps that we take are for the obvious reason that we want to stop the destruction of our natural forest and instead conserve them.”

During his speech, Abang Johari reaffirmed the state’s commitment to preserve more of its forest as Totally Protected Areas (TPA). 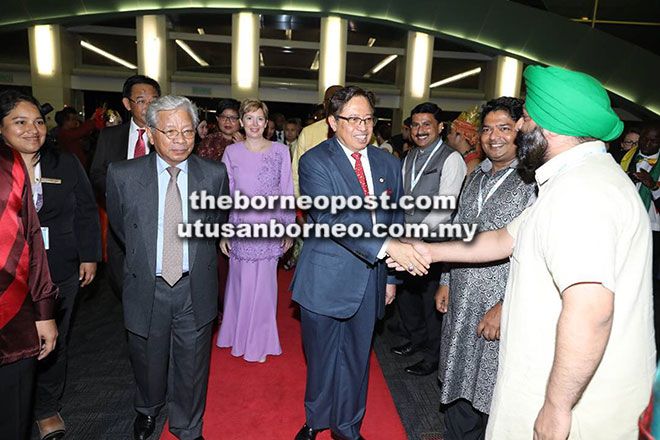 Abang Johari (fourth right) greets a International Summit of Peace participant during his arrival at BCCK last night. He is accompanied by Abdul Karim (second left), Masing (third left) and Hetzel. — Photo by Chimon Upon

As testimony of the state’s commitment, he said as of last year, about 860,000 hectares (ha) of the state’s forest have been gazetted as TPA that comprises national parks, nature reserves and wildlife sanctuaries.

He believed that the state’s rich bio-diversity is a treasure trove of materials that can be unlocked through research and development (R&D).

“Fully realising the potentials of our bio-diversity, soon after I came to office as Chief Minister, I have put in place a policy that will enable researches to be conducted on our plants and animals with a view to give much greater value to our bio-diverse nature rather than simply extracting the raw materials for export like we used to do.

“Research and development is the way to go in order to be assured of the sustainability of the state’s natural resources, and be assured of a better future for ourselves, the stability of our economy and eventually creating an inclusive environment conducive to the creation of a peaceful and socially united society.”

In a related development, against the backdrop of global uncertainties, Abang Johari believed peace is always possible when people make a conscious effort to work towards building a peaceful society.

“It is heartening to know that in 2016 JCI (Junior Chamber International) made that conscious effort to take part of the responsibility of creating a more peaceful world with the launch of the ‘Peace is Possible’ campaign.

“I have learned that this campaign ignited a movement of young people across the globe who are working diligently in their communities to build bridges that foster peace. It is the grassroots efforts in community after community, country after country that will build a more peaceful world for future generations.”

He acknowledged that it was the global reach of the ‘Peace is Possible’ campaign that had brought all the participants from over 100 countries to come to Kuching.

“Nothing more significant could have brought you to this Land of the Hornbills other than your personal and collective pursuit of peace in our societies. At this time in the world when we are witnessing the spread of radicalism, nationalism and extremism, this International Summit on Peace is a welcome relief.

“You have chosen to unite here in Kuching to find sustainable solutions to these global challenges by exchanging ideas, and sharing experiences. The Government of Sarawak joins you in this laudable effort to work, to consciously work towards building a peaceful world.”