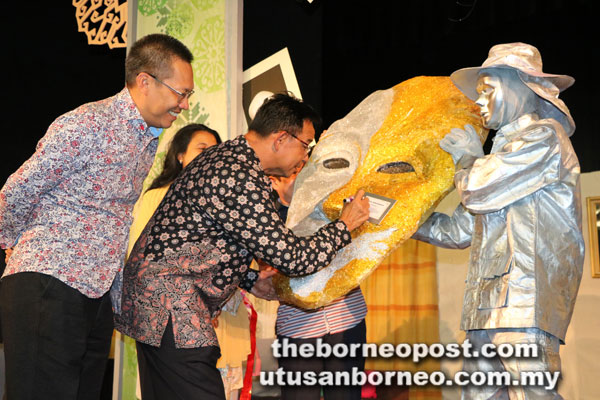 Abdul Karim signs on a giant mask on stage at the DBP Hall during the ceremony to launch the festival. Also seen is Abdullah
Saidol (left).

According to Minister of Tourism, Arts, Culture, Youth and Sport Datuk Abdul Karim Rahman Hamzah, works on modifying the old DUN complex for the proposed centre would commence at the end of this year.

He also commented that the new centre would have comfortable and modern seats for those who attend shows staged there.

“For those who want to organise shows such as performing arts theatres, the centre will be a suitable venue for them. We hope it will contribute to the development of arts and culture in Sarawak,” he said at the launch of the Sarawak Theatre Festival held at the Dewan Bahasa dan Pustaka (DBP) hall here on Thursday night.

Abdul Karim assured all that the state government is always supportive of all arts and cultural activities, especially those involving arts and cultures of Sarawak.

“Sarawak has a unique heritage, culture, art and literature of its own which need to be preserved for future generations,” he said.

He also encouraged local youths to be involved in arts and cultural activities that would help promote and preserve the state’s rich cultural heritage.

Organised by the state department of Culture and Arts (JKKN), the Sarawak Theatre Festival provides a platform for Sarawakian theatre groups to showcase their skills and performance in stage and theatrical shows. It was formerly known as the Dance and Drama Festival and the Pekan Teater, which has been run since the 1970s.