Monday, February 6
You are at:Home»Business»Maybank IB: FBM KLCI to hit 1,800 level by year-end
For the freshest news, join The Borneo Post's Telegram Channel and The Borneo Post on Newswav. 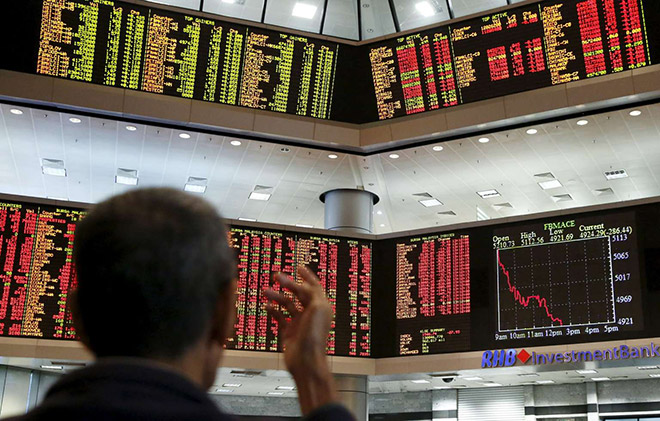 Bursa Malaysia is expected to hit the 1,800 level by year-end, lifted by a potential rebound in corporate earnings growth after three years of no growth, says Maybank IB. — Reuters photo

He said the core earnings of the FTSE Bursa Malaysia KLCI’s (FBM KLCI) component stocks were forecast to grow 7.3 per cent this year and 7.9 per cent in 2018.

“Apart from that, the local bourse will be supported by a rally ahead of the 14th General Election (GE) which is due by August next year, and Budget 2018 to be tabled on October 27,” he told reporters after Maybank IB’s workshop on market outlook for the second half of this year.

Historically, he said there would be a little bit of run-up pre-GE and all the way to the announcement of the GE date, after which there would be a slight dip before recovering to perform again.

Asked on the participation of foreign investors, he said the fund flow reported a net buy for the first seven months of this year and followed by net sell for a month.

Foreign inflow was back in black, with year-to-date foreign fund amounting to RM10.8 billion as compared with foreign outflow of RM3.1 billion.

“We can expect some balancing by the investors after that, however, it will have minimal impact on the bourse,” he added.

On the national gross domestic product growth, Maybank IB expected a full-year growth of 5.5 per cent, underpinned by private consumption, infrastructure-driven investments and firmer external trade growth. The other key factors are consumer sentiment and conclusion of major corporate demerger and merger and acquisition exercises.

On the macroeconomic front, pressure on Malaysia’s economy have eased substantially at the beginning of this year, reflecting economic growth recovery, currency and external reserves stabilisation, as well as, sustained current account surplus and fiscal consolidation.

Commenting on the tense relationship between the United States and North Korea, he said the market was expecting both countries to go back to the negotiating table.

“The market generally is inconsistent, what is consistent is safe-haven like gold…action by North Korea, rhetoric by the US President, thus potential of war is not that high, that is why the market is back to calm seas,” he said. — Bernama