Sunday, September 19
You are at:Home»News»Sarawak»CERTs hailed as rescue frontliners for the grassroots 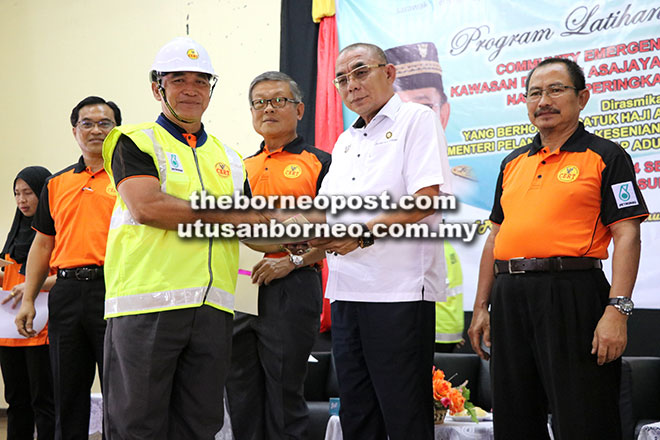 Buang (second right) presents certificates to a representative of CERT Asajaya. Chai is at centre and Habari, right.

ASAJAYA: Members of the Community Emergency Response Team (CERT), as the rescue frontliners at grassroots level, should have a sense of responsibility and commitment.

Minister of Tourism, Arts, Culture, Youth and Sports Datuk Abdul Karim Rahman Hamzah said this at the launch of CERT for Asajaya state constituency at the sports complex here recently.

He said as the first rescue respondent during disasters, CERT is doing a voluntary service for the residents.

“With CERT, the local community can act as first respondents on the scene to stabilise the situation prior to the arrival of the safety and relief professionals.

“In other words, this team is trained and equipped with knowledge to give first aid on the scene and advise residents on what they should do.

“I thank the staff and members of the State Security Unit, government agencies and individuals involved in the programme,” Abdul Karim, who is Asajaya assemblyman, said.

It was sponsored by Petronas under its corporate social responsibility.

Abdul Karim said the programme aimed to raise awareness among the community of the types of emergencies.