Monday, February 6
You are at:Home»News»Sarawak»‘Sarawak to become advanced state under Abg Johari’
For the freshest news, join The Borneo Post's Telegram Channel and The Borneo Post on Newswav. 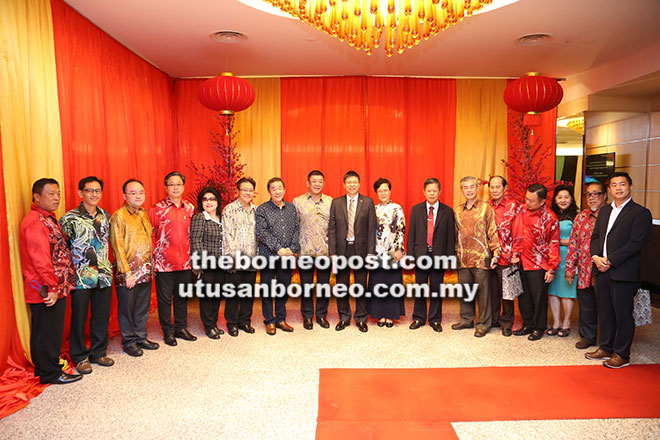 Fu (ninth left), with wife Liu on his left, pictured with leaders and members of Chinese associations and organisations. Also seen is Board of Management for Kuching Chung Hua Middle Schools (CHMS) No. 1, 3 and 4 chairman Dato Richard Wee (eigthh left).

This was pointed out by Chinese Consul-General in Kuching, Fu Jijun who said Abang Johari had brought a strong momentum of development to the state even though the latter had been in office for only eight months.

“With his visionary plan in keeping up with world trend and speeding up the economic and social transformation, Sarawak is on course for a brighter future,” he said in his address at the dinner to celebrate the 68th anniversary of the founding of the People’s Republic of China (PRC) at a leading hotel here on Tuesday.

To achieve the ultimate goals, Fu noted that Sarawak had set up Ministry of International Trade and E-Commerce, Development Bank of Sarawak (DBOS), its own oil and gas company Petros, Upper Rajang River Development Agency and Highland Development Agency.

“That apart, RM1 billion has been committed to develop information and communication technology (ICT) infrastructure, the Bakun HEP Dam has been purchased, RM100 million has been injected into Yayasan Sarawak for financing students to study master and doctorate degrees in science and technology,” he commended.

“He has visited China twice where once he personally sealed a collaboration and another time he witnessed the signing of agreements and memorandum of understanding (MoU) for bilateral cooperation,” he said.

He also said the state had benefitted from collaborations and investments such as in iron production, steel and building materials, oil and gas, hydropower, real estate as well as trade and e-commerce.

“The solar power plant invested by Xi’an Longji and the rubber farm invested by Guangdong Reclamation companies are going well and have hired thousands of Sarawakian workers,” he shared.

On the 68th anniversary celebration, Fu shared that “With 68 years of unabated efforts from all Chinese people, China has become the world’s second largest economy”.

“The ties between China and Malaysia especially have repeatedly shown that no country can achieve prosperity and become strong without collaboration with other countries,” he highlighted.

“For decades, China and Malaysia have been working together to promote our mutual beneficial collaborations. China has been Malaysia’s largest trading partner for eight years, and Malaysia is also the largest trading partner of China among the 10 Asean countries,” he added, pointing out that more and more new collaborations are coming up in the fields of infrastructure, manufacturing, trade, digital economy, culture and education between the two countries.

Fu noted that Prime Minister Datuk Seri Najib Tun Razak had attended ‘The Belt and Road International Cooperation Forum’ in China in May this year.

“The enterprises of both sides signed new agreements valued at about RM30 billion. In August, the RM55-billion Malaysian East Coast Railway, which is co-invested and built by Chinese and Malaysian companies, officially started,” he added.

Fu thus urged both Sarawak and China to continue deepening their friendship for mutual prosperity.