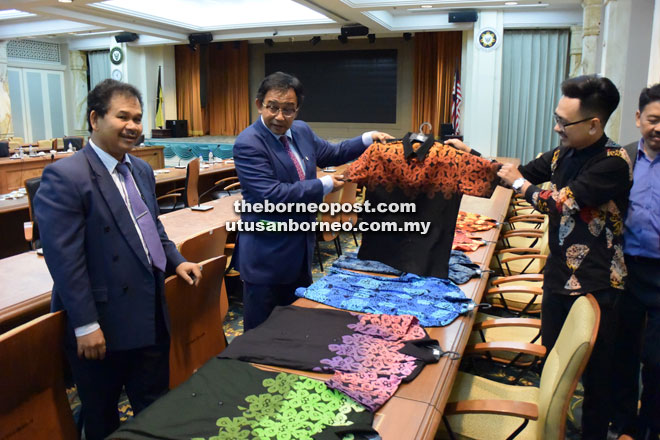 Besides the boat races, Abdul Karim said there will be many other programmes such as the Sarawak Kitchen or Food and Entrepreneurial Sale Festival as well as Malaysian Craft Sale throughout the period.

“The programmes like the Sarawak Kitchen will be held for 10 days starting from the first week (Nov 10) until the end of the second week (Nov 19).

“While the boat races will only be during the weekends, there will also be various activities held during that period for those visiting Kuching Waterfront.

“We hope that more visitors, including those from outside Kuching, Brunei, Peninsular Malaysia and Singapore will come to join us during this festival,” he told a press conference after chairing a meeting on Sarawak Regatta – Kuching Waterfront Festival 2017 at Wisma Bapa Malaysia here yesterday.

With regards to the International Dragon Boat Races, Abdul Karim said the eye-dotting ceremony has been scheduled for Nov 11, to be officiated by Chief Minister Datuk Patinggi Abang Johari Tun Openg.

“Six categories will be competed comprising five international categories and one local category, offering cash prizes of RM45,500 including trophies and medals.”

He was happy to note that participation for the International Dragon Boat Races has been very good, with 23 teams from 11 countries including Malaysia to date.

“Among the participating countries are Brunei, China , Hong Kong, Australia, Philippines and Singapore. This year, we also have participants from Bangladesh and India who are participating for the first time.”

Abdul Karim said the Sarawak Regatta will be launched by Abang Johari on Nov 18 at 9am at Kuching Waterfront.

For this year, the Sarawak Regatta will comprise 17 events and altogether, there will be 26 heats and 18 finals.

“The highlight of the Sarawak Regatta is the challenge for ‘Raja Sungai’ trophy which will be held on Nov 19.

“The Yang di-Pertua Negeri Tun Pehin Sri Abdul Taib Mahmud will be present to watch the race and present the prize to the Raja Sungai winner.”

Abdul Karim said the total cash prizes offered for Sarawak Regatta is RM240,000 and the ‘Raja Sungai’ will bring back a trophy and cash prize of RM10,000.

The entry forms for Sarawak Regatta will be available from Oct 9 at Sarawak Rivers Board office on the second floor of Electra House. The closing date is on Oct 27.

The draws for the boat races will be held on Nov 9.

Abdul Karim also took the opportunity to announce that during the 10 days of Sarawak Regatta – Kuching Waterfront Festival 2017, the whole of Gambier Street and Main Bazaar will be closed to traffic.

“During this period, I would like the city folks to avoid using the road during the two weekends because the road from Brooke Dockyard to Kuching Waterfront (Old Taxi Station) will be closed on the launching day and closing (of the Sarawak Regatta).

“As for the Main Bazaar, half of the road will be closed during the 10 days for the stalls. If possible, please also avoid the road.

“If we can get the agreement to launch the Golden Bridge during the regatta, they (visitors) can cross the river using the bridge. I would love to see the Golden Bridge officiated at the same time as the Sarawak Regatta.”

Abdul Karim said for this year’s Sarawak Regatta – Kuching Waterfront Festival 2017, they are expecting some 200,000 people.