Saturday, December 3
You are at:Home»News»Nation»Ministry to help Wildlife Dept track down offenders 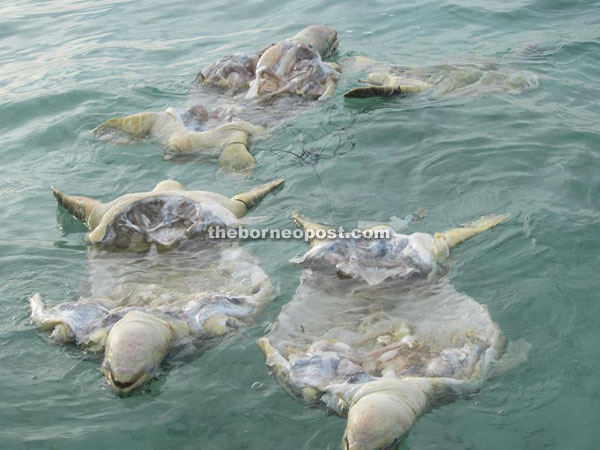 File photo of sea turtles which were killed and dumped at sea.

PUTRAJAYA: Horrified by the blatant lack of regard for the wildlife, the Natural Resources and Environment Ministry is ready to help the Sabah Wildlife Department to track down those perpetrators who recently killed sea turtles and wildlife on Pulau Bum Bum off Semporna, Sabah.

Condemning the discovery of hundreds of bones from the dead sea turtle carcasses scattered in some bushes on the island on Sept 28, Natural Resources and Environment Minister Datuk Seri Dr Wan Junaidi Tuanku Jaafar said he was appalled and horrified by the blatant lack of regard for the welfare of the turtles by some unscrupulous people who live off the coastal areas.

In a statement here yesterday, he said the ministry was totally committed to preserving the land based and marine wildlife.

“The recent discovery of hundreds of turtle bone fragments and turtle carcasses floating in the sea are deeply saddening, as are the numerous cases of pygmy elephants being killed, their tusks brutally cut off and the poor animals left to die a slow and painful death in the rivers and forests of Kinabatangan and Tawau,” he added. — Bernama