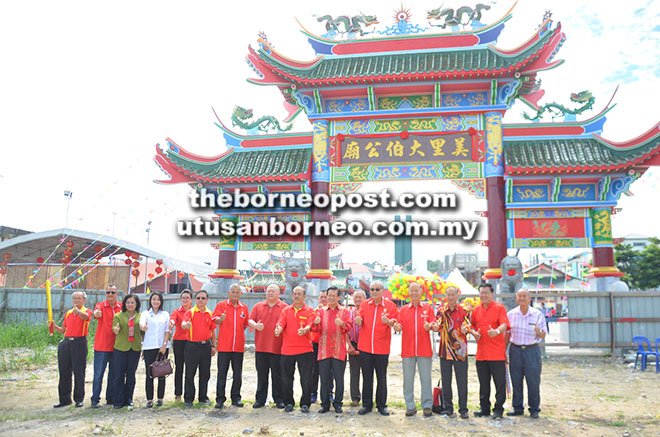 Lee (sixth right) with temple committee and community leaders in front of the new arch.

MIRI: The oldest Chinese temple in Miri, Tua Pek Kong, yesterday had a new arch erected, which enhances its appearance.

The 104-year-old temple in the city centre is frequented by tourists and visitors for its unique and traditional Chinese architecture and murals.

Assistant Minister of Tourism, Arts and Culture Datuk Lee Kim Shin is confident the RM500,000 arch will make it more attractive to tourists and visitors.

“I have suggested to the temple committee to beautify the temple like having more traditional Chinese temple architecture and decorations.

“I hope the developer will have something in the pipeline for the temple and its surrounding,” Lee said after the unveiling of calligraphy on top of the arch recently by him, the temple committee and Chinese community leaders.

He congratulated the temple committee for erecting the arch sponsored by well wishers and supporters including Datin Paduka Chai Yu Lan.

“In almost every place we see temples, mosques, surau, churches and chapels which testify to the religious freedom our people enjoy.”

People from various religious, racial and ethnic backgrounds live in peace and harmony together due to a moderate government, even with Islam as the official religion of the country, Lee pointed out.

“However, we must not take things for granted but cherish and treasure religious freedom which enables the people to live together in peace and harmony.

“We, particularly the younger generation, should uphold this.”