Tuesday, February 7
You are at:Home»News»Nation»KLIA IPD to monitor security of KLIA area
For the freshest news, join The Borneo Post's Telegram Channel and The Borneo Post on Newswav. 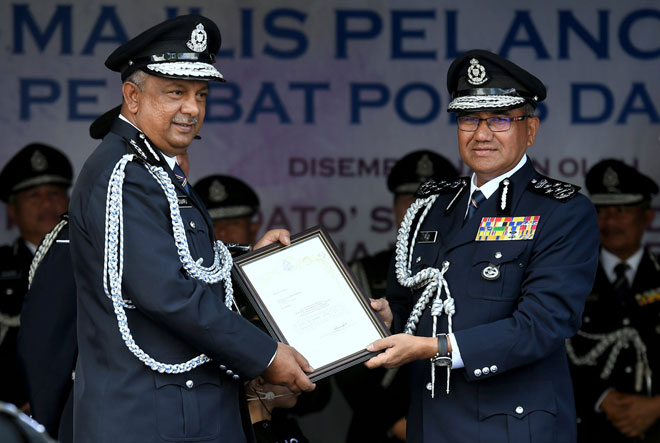 Fuzi (right) presents a certificate to Zulkifli at the launching of the KLIA IPD. — Bernama photo

Inspector-General of Police Tan Sri Mohamad Fuzi Harun said Malaysia needed to learn from the bomb attack incidents at Atarturk Airport in Turkey and the Brussel Airport in Belgium that were the target of terrorist groups.

“With a passenger traffic volume exceeding 52 million a year,  the safety level at KLIA needs to be improved, ensuring a sufficient number of policemen and comprehensive logistics support is ready to address any oncoming threats,” he said when launching the KLIA IPD here.

KLIA IPD, which previously operated at the KLIA Police Station, is the 16th IPD in Selangor and the 156th in Malaysia, with ACP Zulkifli Adamshah as its first police chief.

Mohamad Fuzi said the KLIA IPD would give priority to intelligence and investigation elements as well as supporting forces such as the Bomb Destruction Unit, Canine Unit and the Special Action Unit in the event of any crisis or disasters.

Currently, the KLIA IPD has 875 personnel and officers and the number was expected to be increased to 1,084 people within a period of three years, he said.

Mohamad Fuzi added that the launching of the KLIA IPD was also as preparation for the rapid development of an aerocity as well as to address security aspects and public order in the future. — Bernama