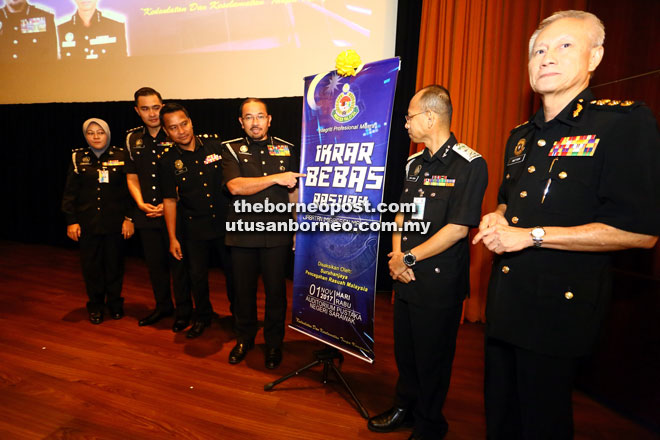 Mustafar (fourth left) gestures at the IBR bunting while Ken (second right), Mattison (right) and others look on. – Photo by Muhammad Rais Sanusi

KUCHING: More than 19,000 illegal immigrants and 427 employers were arrested by the Immigration Department between July 1 and Oct 31 this year.

This was disclosed by Immigration director-general Datuk Seri Mustafar Ali, who pointed out that the number of arrests was the result of large-scale operations carried out by the department nationwide.

“The arrests were made against illegal immigrants who did not possess an E-Card (enforcement card) as well as employers who failed to register their foreign workers after the deadline for the registration of the card.

“Out of these operations, the construction sector and service sector recorded the highest number of illegal immigrants without an E-Card,” he told a press conference after attending the state Immigration Department Corruption-Free Pledge (IBR) ceremony at the State Library here yesterday.

Mustafar said the number of arrests made over the four months was a great success due to the department’s aggressive action in its efforts to double the number of enforcement operations.

“It is not an easy task but due to the aggressive step taken by all Immigration Department offices nationwide, we managed to arrest the illegal immigrants,” he remarked.

He added that the E-Card, which was launched on Feb 15, aimed to fulfil the employers’ request to fill in the labour requirements in authorised sectors and that the card was only valid till Feb 15, 2018.

On a related matter, Mustafar also revealed that the Immigration Department has successfully achieved its key performance index (KPI) target of 850 enforcement operations every month since August.

“In view of this result, Deputy Prime Minister Datuk Seri Ahmad Zahid Hamidi has urged for the Immigration Department to increase its operations to 1,300 per month, which we have managed to achieve last month (October) where we successfully carried out 1,327 enforcement operations nationwide,” he said.

Around 300 officers representing 49 Immigration Department offices from throughout the state participated in the IBR ceremony.