Saturday, September 18
You are at:Home»News»Sarawak»Aiming to be net exporter of fruits 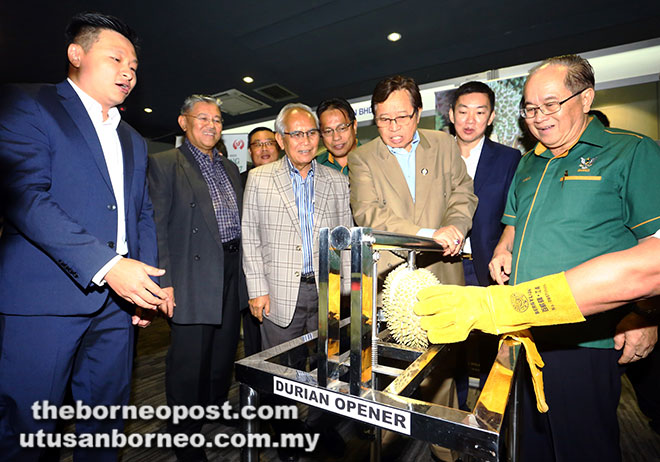 KUCHING: Sarawak aims to become a net exporter of fruits and fruit products not only in Malaysia but also in the region.

“Our aim is to eventually become a net exporter of fruits and in order to reach that goal, we have to first embrace technology in terms of production as well as marketing.

“By incorporating smart technology, our production of fruits will be efficient and precise especially when we are now talking about precision farming. This means that we can manage the data (of fruit production) and will be able to plan the production upstream, midstream as well as downstream,” he told a press conference after witnessing the signing of a memorandum of understanding (MoU) between the state government and Top Fruits (Sarawak) Sdn Bhd at Penview Convention Centre (PCC) near here yesterday.

On the MoU, Abang Johari said it is a collaboration between Top Fruits (Sarawak) Sdn Bhd and the state government through the Ministry of Modernisation of Agriculture, Native Land and Regional Development to explore ways to maximise fruit production and develop the fruit industry along the supply and value chain in Sarawak.

“Today we focus on durians in particular as the ‘King of Fruit’ has big potential in the international market and Top Fruits has the technology and experience not only in planting but also right up to marketing.

“For the first step, they (Top Fruits) will look into durians and I’m pleased to hear that the Ministry of Modernisation of Agriculture, Native Land and Regional Development has used technology to identify areas where we can enhance the production of durians through drone technology.” 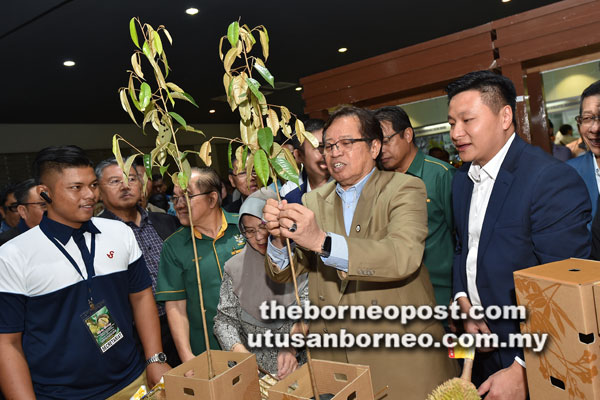 Abang Johari examines a durian seedling while touring the exhibition booths held in conjunction with the MoU signing ceremony. Dr Tan is on his left. — Photo by Tan Song Wei

He explained that the drone will be able to record the data including the soil where the durians can be planted systematically by smallholders as well as big plantations.

“The data recorded can be used for us to plan long-term production of durians especially when there are a lot of spin-off industries from the fruit these days.”

Earlier in his speech, Abang Johari said apart from durians, the state should also look into the potential of coconuts.

“I was informed that the world now needs a lot of coconuts not only through the coconut flesh and water but also its husk and shell which can be salvaged for biomass purpose.

“So I will hand this over to (Deputy Chief Minister) Datuk Amar Douglas Uggah (Embas) to look after. From there we will also look into exploring the potential of other fruits and hopefully one day Sarawak can become a major producer of fruits for this region,” he remarked. 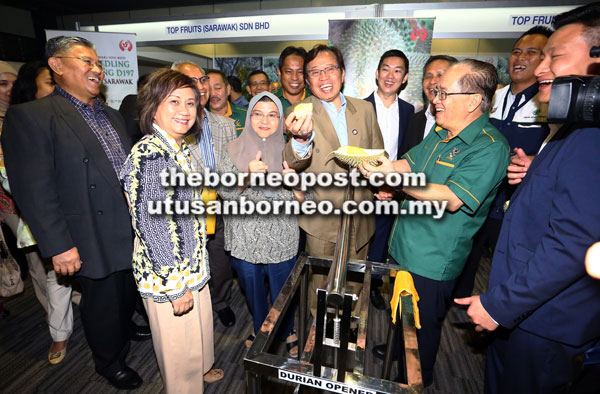 Abang Johari examines a durian seedling while touring the exhibition booths held in conjunction with the MoU signing ceremony. Dr Tan is on his left. — Photo by Tan Song Wei