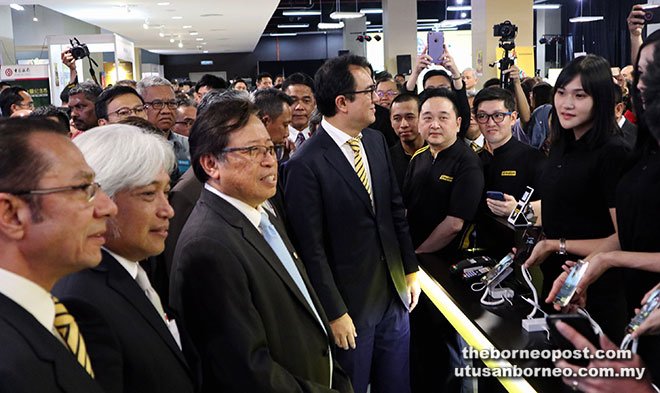 Abang Johari (third left) and Muhammad (second left) visit one of the exhibition booths at the Sarawak Financial Carnival at CityOne Megmall.

Chief Minister Datuk Patinggi Abang Johari Tun Openg in revealing this said following the increase,  people now, with just a smart phone, can go to the Sarawak Pay and by scanning a QR code, will be able to pay for more things.

“I must thank the BNM governor Tan Sri Muhammad Ibrahim, who in our discussion yesterday had agreed to increase the Sarawak Pay gimmick from RM200 to RM3,000.

“Meaning, people can pay anything that they want to pay within that RM3,000 through Sarawak Pay,” he said at the launch of Sarawak Financial Carnival at CityOne MegaMall here yesterday.

Following the expansion of the balance capacity to RM3,000, Abang Johari believed that farmers in the state could use Sarawak Pay for their businesses.

He hoped that the Sarawak Pay would become a new instrument of payment.

The Chief Minister said although Sarawak still has a lot of catching up to do in the cyber world, it has to adopt cashless business as a way forward.

“I hope to see Sarawak become a cashless society, where in the next five to 10 years everything is going to be digital.

“I also hope our people will know (about) the new mode of payment that is available now,” he said.

Abang Johari said the state government would also try to extend Sarawak Pay to Peninsular Malaysia and other countries in the future.

He said Sarawak Pay could be extended to the state’s neighbour across the border, through a collaboration between Indonesia and Malaysia.

“Also, perhaps with our durians, pineapples and other tropical fruits that we want to sell to China, Sarawak Pay can collaborate with Alibaba Pay.

“Thus Sarawak Pay is the platform of the new economy for the future,” he said.