Wednesday, July 6
You are at:Home»News»Sarawak»‘LRT to be extended to other parts of Sarawak if it goes well’ 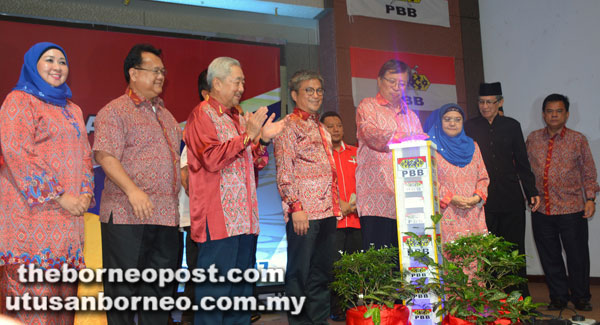 Abang Johari (fourth right) officiates at the meeting of representatives of PBB branches from Bukit Assek, Dudong, Bawang Assan, Pelawan and Nangka. He is joined by his wife Juma’ani (third right), (from left) Sharifah Hasidah, Nanta, Bustari, Dr Annuar, Wan Hamid and others.

SIBU: The light rail transit (LRT) project proposed to be implemented in Kuching may be extended to other parts of the state in future if everything goes well, said Chief Minister Datuk Patinggi Abang Johari Tun Openg.

“We will try out in Kuching first and if it is works well and the cost is competitive – then (connect) Kuching-Sibu to Tanjung Manis, Bintulu and Miri (in future).

“What is wrong with that? But DAP claimed that I am too ambitious. We try LRT out in Kuching first and if it is good and it is not expensive – what is wrong for all Sarawakians (to enjoy the service in future)?” he said when officiating at the meeting of PBB branch representatives from Bukit Assek, Dudong, Bawang Assan, Pelawan and Nangka here yesterday.

It was reported recently that Abang Johari had expressed optimism that the proposed LRT project could be implemented as early as 2019 after completion of feasibility studies.

Meanwhile, he revealed that Singapore had expressed keenness to work with Sarawak on Sarawak Pay, which he believed would be good for tourism as tourists from Singapore would not have to worry about carrying too much cash with them when visiting the state.

He also said the state government would try to extend Sarawak Pay beyond the state’s shores in the future.

“Sarawak will become a cashless society,” he said.

Abang Johari also mentioned about the good relationship between the federal and state governments.

“We are very fortunate to have Datuk (Seri) Najib (Tun Razak) as our Prime Minister. Don’t change the leadership,” he said, adding it is easier to negotiate with Najib on the devolution of power.

He added that Najib had approved lots of allocation for the development of Sarawak.

Assistant Minister of Education and Technological Research Dr Annuar Rapaee, who is PBB Nangka chairman, also spoke at the function. 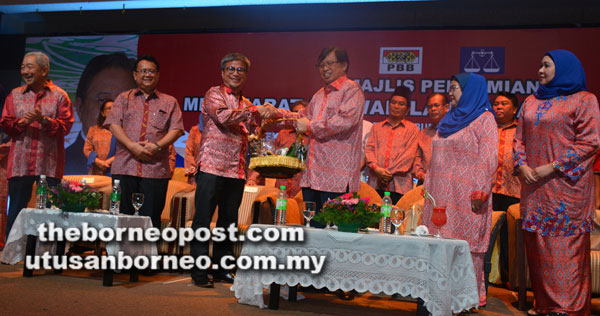 Dr Annuar (third left) presents a token of appreciation to Abang Johari, while Juma’ani (second right), (from left) Bustari, Nanta, Sharifah Hasidah and others look on.

Previous ArticleGPS useless for trainees who got lost on way to Long Bemang
Next Article Strive to understand, keep updated on latest technologies, MIED staff told