Thursday, October 6
You are at:Home»Features»Answering the call of a school in need 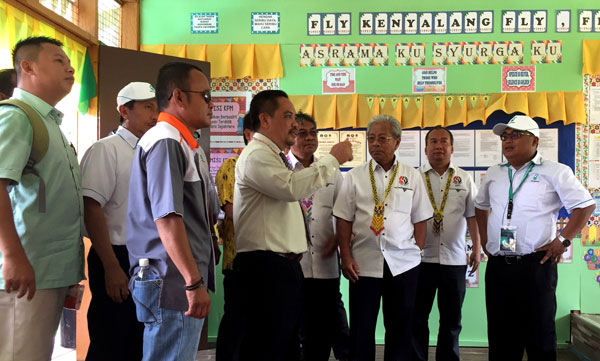 THE scientist was displaying the essentials of laboratory work — gloves, protective glasses, a clean work table and equipment neatly laid out on top of a sheet of plastic.

He was surrounded by roughly a dozen primary school children, watching as he scooped sugar into three of the four cups on the table. Warm water came next, then careful stirring.

“It has to be completely diluted,” the scientist told his young audience.

A plethora of food colourings – purple, blue, red and yellow —  was poured into the four cups.

The scientist then used a large syringe to carefully transfer the coloured liquids into a tall drinking glass. When two colours met, they merged to form a new layer of colour.

The children – and the adults present — were fascinated as the four colours settled to form a rainbow. It was almost magical — but it was science.

“That’s how density works,” said the scientist to all-round applause.

This lesson in simple chemistry was one of the enrichment classes held recently at Sekolah Kebangsaan Ulu Pelagus (SKUP) in conjunction with Petronas’ annual Corporate Social Responsibility (CSR) programme.

One hundred volunteers from Petronas and eight partners pooled together RM1.35 million to support this small rural primary school and the community that rallies around it.

SK Ulu Pelagus is located just past an old timber camp, eight hours from Bintulu, five of which on bumpy timber roads. Passengers along for the ride bounce in their seats like a sack of potatoes even though they are technically strapped down.

The trip is not without its allure —- breathtaking views of seemingly endless valleys with clouds floating among the tallest trees in the early morning.

Roads wind round the bends on the hilly terrain except in sections, interpersed by log or metal bridges over copper-coloured waters.

The roads are gravels, mostly tolerable in some parts, and eroded bare in others, or remnants of tarred roads repeatedly driven over by 4×4 wheels.

The skilled drivers of the hardy vehicles belonged to the oil company’s 4×4 enthusiasts club. More wanted to come along but 24 vehicles were all they had.

On the morning of departure (Nov 1) at the Petronas headquarters in Bintulu, the staff worked speedily to cling-wrap everything.

Many of the vehicles were pickups with a large water-proof bag in the truck bed but rain-soaked electrical appliances or damp clothes or heaven forbid, condensation inside the VIP’s framed memento were things to avoid.

Petronas is not new to going the distance to help the rural communities.

According to Petronas MLNG head Pau Kiew Huai, they have already covered considerable ground since 2010 but SKUP took the cake for being the hardest to access.

“Lorries find it difficult because roads aren’t flat, and there are water run-overs and holes. We had to pass through three timber camps. It wasn’t easy for us to bring materials from Bintulu to Pelagus. For a safe journey — six hours — but some lorries took 8-10 hours because of rain, heavy loads or punctures.”

“We have chosen SK Ulu Pelagus as our CSR project for 2017. We are inspired by the school’s administration under headmaster James Ali who took the initiative to reach out and seek our help despite the distance.

“I believe this is done with one single pure intention — to secure the future of the students,” Pau said.

From the town of Kapit, it’s 30 minutes by longboat to Batu Arang Camp — plus one and a half hours of timber roads.

From Bintulu, it’s around eight hours, most of which along bumpy timber roads. How to create a rainbow in a glass — a lesson in liquid density.

The school was set up on Jan 1, 1975. Before that, SK Nanga Pelagus was the only option to get a basic education. It’s a gruelling 150km from the riverine communities along Sungei Pelagus.

Most of the students there are from the longhouses of Sungei Anap Tatau, Bintulu. There are 54 students, 14 teachers and nine support staff. They still rely on generators for electricity, and gravity feeds for water supply.

While our accommodation at Rumah George was sufficient and its residents warm and hospitable, arriving at the school almost felt like being transported back to civilisation.

Here, Petronas has left its mark in the shades of its corporate colours, the most recognisable being the bright shade of teal.

It’s most evident at the new school hall smack in the centre of the complex of classrooms, and also among the new motivational signs in both English and Malay as the primary school students walked from one block to the next under a brand new sheltered walkway.

This chapter of the story really began in early 2017 when SKUP teacher Felicia Tigai, 28, heard about the CSR programme from a friend in Petronas.

She saw this as an opportunity for their small rural school — a community of 54 students between pre-school and primary six, under the watchful eye of 14 teachers and nine support staff.

“We lacked many things. Students lacked facilities and were already behind in academics. We only had 40 books in our library,” she noted.

Teachers also lack access. And Felicia pointed out that they had to be creative about how they teach and if they needed to get things from the Internet, they had to make the two-hour journey to Kapit through Batu Arang Camp.

Originally from Bintulu, Felicia found it difficult getting cut off from the rest of the world. But she grew close to her students. When a previous batch of primary six students needed proper shoes to represent the school at a sports event, she chipped in so that they could participate.

At SKUP for four years, she has learnt to cope, even thrive, despite what the school lacks. And between 2015 and 2017, she did her Masters in Education.

Asked how she felt about playing a role in bringing Petronas to SKUP, Felicia said she didn’t know how to describe it.

“I’m still in a daze. But everything that we’ve done is well worth it.”

SKUP headmaster James Ali said they wrote to Petronas in March, requesting for a proper school hall as they have been squeezing into the dining hall all this time for their activities.

“Petronas also got partners in to help with other buildings,” he said, adding that while applying for help was not difficult, there were lots of procedures.

Apart from facilities, Petronas and partners also helped with books and motivational talks which are a great help to rural schools but as headmaster, James only has eyes for one prize.

“I hope my school achieves excellent results now that we have the facilities and infrastructure. Academic excellence is our main aim,” he said.

There has been improvement in the two years that James has been at the helm.

“We’ll carry on this momentum. This year, I hope we get good results in UPSR,” he said.

Life at SKUP felt isolating at first. The school had WiFi but the teachers told their visitors it was far too slow to concern themselves with. We had to track people down the old-fashioned way but that wasn’t too difficult since the volunteers were divided into teams and each team had a duty station.

The newly-refurbished school kitchen bustled with activity. The school hall was being decorated for the official launch. The journalists and film crew occupied a tiny classroom for work and gear storage.

On the second day at the school (Nov 2), I was left to wander from classroom to classroom to observe the lessons that the Petronas staff brought from the big city — an astronomy class in one classroom and an exploration into the workings of an electrical circuit in another classroom.

Like the scientist with the water density experiment, the children’s guides

to outer space and inner spark were the staff of Petronas. So were those on fire safety and demonstration duty.

Earlier in the day, all the students and teachers were out in the field with the fire chief explaining how to operate a fire extinguisher, put out a small fire and not start a fire in the first place.

For Phil Foster Masing, being made Petronas’ SKUP project leader was an opportunity to give back to his own community in Kapit.

“It’s been a colourful journey and challenging in terms of location. The Petronas Hq is located in Bintulu, and our means of transportation is over land. We have to collaborate with our partners to make things happen. It’s a seven-month journey since March,” he said.

To be precise, it took 210 days to bring the project to 100 per cent completion — from conception to delivery. Because the partners involved in the Nanga Penyarai (2016) project had expressed interest in future collaborations, Petronas put out a call and several companies responded for SKUP.

They ran programmes, promoting safety and hygiene and emphasising on how much was left to learn.

She said the conditions now were far better — almost as they imagined how an urban school would look.

“I hope the students will study hard and get good results. This project is a huge encouragement to them to work hard.”

For parents who have been dragging their feet about sending their childrento school, Puyu urged them to do so as soon as possible.

“We have everything now — thanks to Petronas.”

A view of the school grounds from the river. Most of the structures lie behind the small hill.

The ceremony opened with a dance by the students, then speeches and a launch gimmick, all with Iban hospitality.

Masing made it a point to address him in his speech, saying meeting the needs of a rural school was a shared concern.

“Education must be put on a high pedestal. Without education, nothing will change. Petronas understands this and has walked the talk,” he added.

After the confetti was cleared and the guests had left, SK Ulu Pelagus will resume classes with renewed vigour.

And like a rainbow you can layer into a tall drinking glass, achieving the academic excellence that headmaster James Ali wants will take time, patience, and perseverance.

The young students may lack the ability to articulate it now but one hopes this outreach initiative will provide answers and also raise questions for further progress.

What other liquids can you layer and why? What else is outside our solar system? How is electricity created? What is outside Ulu Pelagus?

Back at Rumah George that night, the 48-door longhouse partied with the epicentre of the festivities outside our tuai rumah’s residence.

On my first day there, the residents took note as I walked the length of their white-tiled ruai — with a look of wonder on my face.

An old gent chuckled from his office chair on the ruai as I passed him the second time, and he asked in Iban if I had now seen the whole longhouse.

I laughed in English and said in Malay: “It is very long.”

On a noticeboard outside the tuai rumah’s bilik were photos of children from the longhouse who graduated from university.

I don’t know if they went to SK Ulu Pelagus but perhaps, the present students too have one such place of honour in their longhouse. Maybe one day, their faces will be on it.