Tuesday, September 27
You are at:Home»News»Sarawak»Poised to be one of the best in Asean 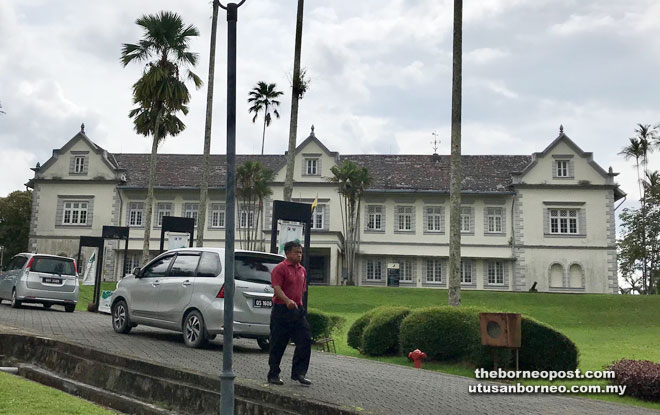 Sarawak Museum is set to undergo conservation and restoration works at a cost of RM28 million. 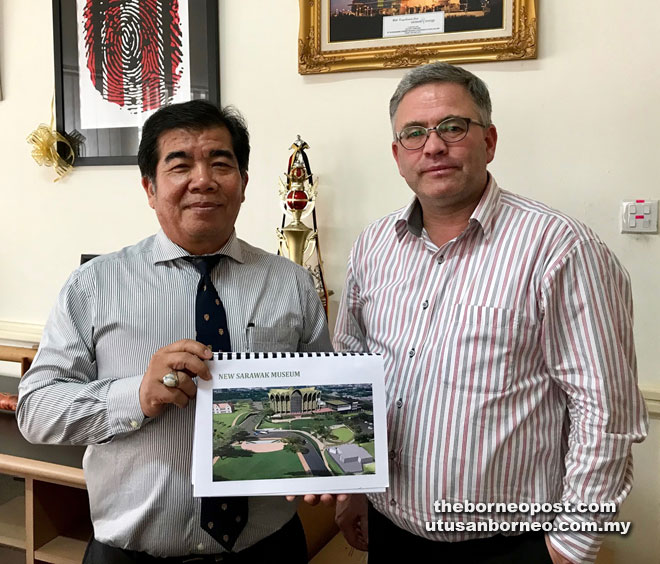 Ipoi (left) shows an artist’s impression of the new RM308-million Sarawak Campus Complex. With him is Van De Bunte.

KUCHING: The RM308 million Sarawak Museum Campus is set to become among the finest museums in Asean upon its completion by 2020.

In stating this, Sarawak Museum Department director Ipoi Datan said work on the project is progressing according to schedule.

It is known that the development of this museum campus is fully funded by the state government, with the objective of preserving and showcasing the rich historical, traditional and cultural heritage of Sarawak in a thematic manner.

“It will be a world class, state-of-the-art facility in terms of preservation and conservation of artefacts, which include (utilisation of) lighting and temperature control.

“On top of that, it will become a ‘Borneo Museum’ of sorts in that we have over 500,000 artefacts originating from all over Borneo. It will also include Homo sapiens remains found at Niah Caves and estimated to be more than 40,000 years old.

“Our vision is that it would become a global centre for Bornean heritage by 2030,” Ipoi told The Borneo Post yesterday at his office here, where Sarawak Museum Department’s senior project leader Hans Van De Bunte was also present.

He explained that the RM308-million project would include not just the main complex but also the storage and restoration facilities, administrative centre as well as landscaping works.

“The cost of the whole project is relatively low compared to what it would cost in advanced countries. Nevertheless, it will still offer state-of-the-art facilities including 6,000 sq metres of exhibition space over three floors, a research centre, conservation and collection laboratories as well as a children’s education centre,” he added.

Ipoi said the whole third floor of the 5-storey building would be used as an immersion exhibition centre to provide that immersive feeling of what Sarawak is – as it would highlight all the tribes found across the state.

“Once completed, visitors will be able to use their smartphones to get information on our artefacts on display. We will use advanced visual aid that will allow people to interact with them. At the same time, we will still provide information to visitors through the conventional method,” he said.

According to Ipoi, the two-phase development consists of the museum campus and the conservation project of Sarawak Museum.

On a related issue, Ipoi said his department would bring back the more than 100 individual Homo sapiens skeletal remains from the University of Nevada, USA once the facilities are ready.

He added that other artefacts originating from the state would also be acquired in due time.

In addition, Ipoi disclosed that Sarawak Museum would be undergoing a conservation and restoration process at a cost of RM28 million.

“The restoration and conservation process will include the building itself as well as the artefacts in it.”

Meanwhile, the artefacts exhibited at other museums here such as the Chinese Museum, Islamic Museum and Textile Museum will remain where they are, and will not be transferred to the new Sarawak Museum Campus.