Thursday, July 7
You are at:Home»News»Sarawak»Unidentified body found floating in river 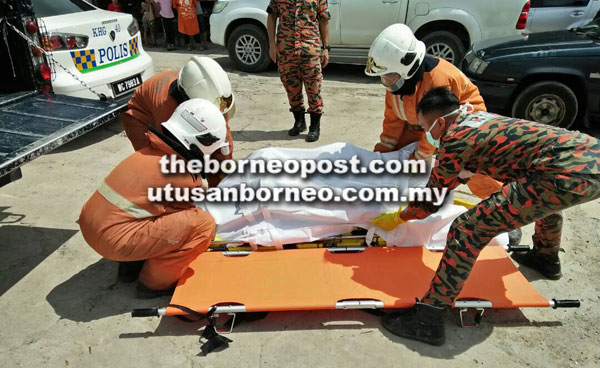 Bomba personnel lifting up the unidentified body on a stretcher which was later handed over to the police.

KUCHING: An unidentified body of a man was found floating in Sungai Sarawak next to Jalan Datuk Abang Abdul Rahim yesterday morning.

The Fire and Rescue Department (Bomba) led by their operations commander PBKII Patrick Mawong were called to the scene to fish out the body from the river at 10am.

No personal identifications were also found on the deceased. The body was later handed over to the police for further action.

In an unrelated incident, a machine to process plastic materials suddenly caught fire at a factory in Demak Laut, Jalan Bako around 1.30am yesterday.

Bomba Tabuan Jaya dispatched their personnel to the factory to find that the fire was already doused by the factory workers with a fire extinguisher.

Bomba further revealed that the machine is an unused faulty unit and the cause of the fire is still under investigation. No injuries were reported during the incident.