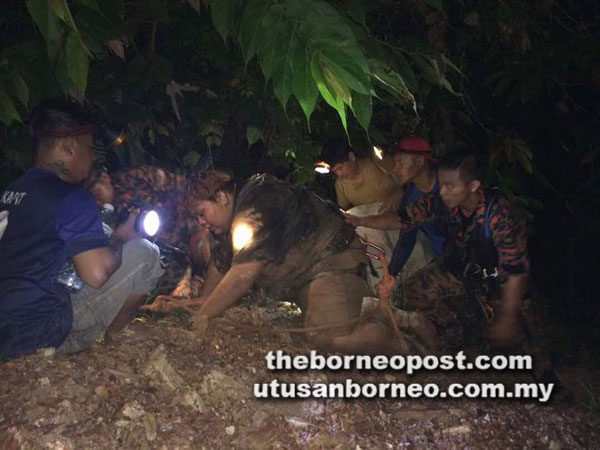 Rescuers work together to bring one of the 4WD passengers to safety.

KAPIT: A four-wheel drive vehicle plunged some one hundred metres from the top of a hill into a ravine at the junction between Jalan Kelapa Sawit and Jalan Ngemah in Song District on Thursday (Dec 28) evening at about 8.30pm.

Fortunately all four passengers and the driver only sustained minor injuries.

Fire and Rescue department (Bomba) received a distress call reporting an accident around 9pm.Five personnel led by Team Leader Imran Ahmad,four Song Volunteer Fire and Rescue Team together with the Police rushed over to the scene.

When the firemen arrived at the scene, three of the passengers had managed to get out of the vehicle and climbed up the steep slope to make the call to Bomba. Two others were trapped in the vehicle.

The firemen descended to extricate the victims before using a rope and the ‘body harness method’ to bring up the other two passengers.

The victims were taken in a Bomba vehicle to receive outpatient treatment at Song Health Clinic later in the evening.

Travellers from Sibu or Kanowit going to Song or Kapit are advised NOT to use the Jalan Kanowit-Song-Kapit because it is still under construction. Moreover, the stretch of road, Jalan Kelapa Sawit between Ngemah and Song is a private road.

During the current rainy season, the road is very slippery and muddy. It is better to travel by express boat which only takes about three hours compared to driving which takes more than four hours from Sibu to Kapit.

Those travelling by road are advised to drive during the day and avoid travelling at night.