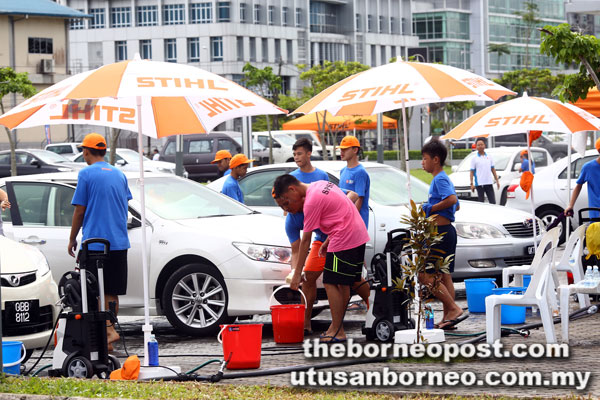 The car wash in progress. — Photos by Muhd Rais Sanusi.

KUCHING: The two-day KTS Group of Companies (KTS) and Stihl series of ‘Charity Car Wash’ saw a total of 850 cars getting cleaned during the Kuching leg which ended yesterday.

The event to mark the 50th anniversary of KTS and Stihl collaboration since 1968 is part of KTS Corporate Social Responsibility (CSR) programme to help raise fund for Chinese independent schools in Sarawak and Sabah.

Students and teachers from beneficiary schools in the respective areas assist with the car wash on the scheduled dates from 8am to 4pm.

The event will move on to Sibu, Bintulu, Miri, Kota Kinabalu and Sandakan before ending in Tawau in March.

The charity event will move to Sabah in March starting with Kota Kinabalu (location to be announced) on March 10 and 11; Yu Yuan Secondary School in Sandakan on March 17 and 18; and ending with Sabah Chinese High School in Tawau on March 24 and 25.

Those who participated in the car wash stand a chance to win Stihl products in a lucky draw.

Winners who were not present during the lucky draw are advised to call KTS Trading at 082-245245 for their prizes.

Students, teachers and staff pose for a photo at the end of the event.