Tuesday, July 5
You are at:Home»News»Sarawak»Local shipbuilders assured of support from state govt 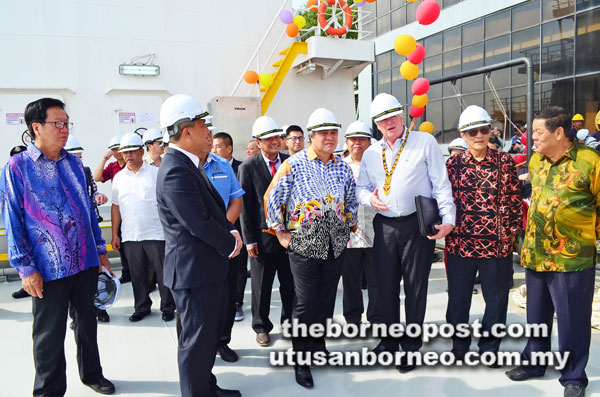 Weeden (third right) in a discussion with Awang Tengah (fourth right) during a tour on board King Islander 2.

SIBU: The local shipbuilding and ship repairs (SBSR) industry has the potential to grow, in view of its long history and the positive growth seen in exports trade.

According to Deputy Chief Minister Datuk Amar Awang Tengah Ali Hasan Awang Tengah, this industry began in the state with the establishment of Brooke Dockyard in Kuching in 1912 by the White Rajah.

Adding on, Awang Tengah also assured the SBSR industry players here that the state government would continue supporting the industry so as to make it more competitive in the global market.

In this regard, he said upgrading works on the SBSR infrastructure located on a 250-acre land at Rantau Panjang Industrial Estate had commenced – with more initiatives by the government to follow suit.

“I believe our local SBSR industry has the potential to grow. They need to venture into other market segments

such as fisheries and marine tourism, or the leisure sectors,” he said.

Awang Tengah also said the state’s export value of vessels from January to November last year stood at RM320.5 million – in comparison, it was RM376.5 million for the whole of 2016.

Meanwhile the King Islander 2, which is 80m landing craft, will be shipped Australia to resolve freight issues affecting the King Island in Tasmania.

It is said to be the most sophisticated vessel ever built in Malaysia.

In his remarks, Weeden said TasPorts was tasked by the Tasmanian government to establish a shipping service between Tasmania and King Island last year.

“We started by chartering a vessel and put it into trial in April last year. We knew that we would need a bigger, more sophisticated and more reliable ship; therefore, we started a global search to find a partner to provide exactly that ship.

“It did not take long for us to find Vitawani because of its very strong global reputation. We are able to negotiate a good contract for both parties and we’re convinced that we should be able to secure the vessel that we’re looking for,” he said.

According to Weeden, King Island is a small island located in the northwest of Tasmania and it is very important to the Tasmanian economy.

“King Island is one of biggest producers of beef and dairy products in Australia – and also in the world. The sea and air connection to the island is fundamental not only to King Island’s economic prosperity, but also to the growth of Tasmanian economy.”