Friday, May 20
You are at:Home»News»Sarawak»Minos envisions making Bung Bratak Heritage Centre like Borobodur 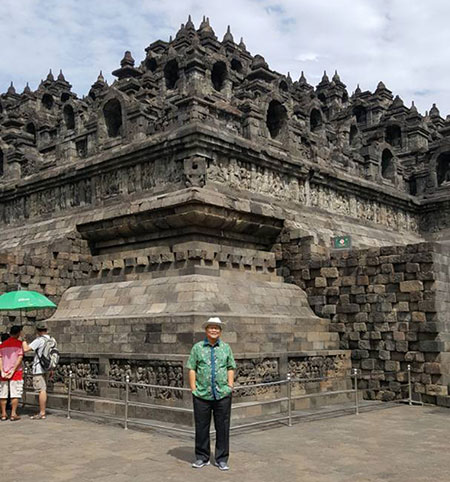 Minos poses in front of the Borobodur temple.

KUCHING: The success story of Borobodur near Jogjakarta as a tourism attraction will be the inspiration for the setting-up of the Bung Bratak Heritage Centre (BBHC) sometime this year.

Bung Bratak Heritage Association (BBHA) chairman Dato Peter Minos said he would pick up some ideas from his recent visit to Borobodur to promote and develop the BBHC in Bau.

“Honouring and respecting history and heritage pays. That I must say. The over 1,000-year-old Srivijaya Buddhist temple of Borobodur near Jogjakarta has brought massive tourism money and thus prosperity to the city. Each day, thousands of visitors, both foreign and locals, flock to see the art, sculptures and the massive structure of Borobodur,” he said.

He pointed out that together with other tourism sites of the dormant volcanic Gunung Merapi, an ancient Hindu temple of Prambanan and the old and new palaces of Logjakarta’s kings, Borobodur must be bringing in billions of dollars each year to the people of Jogjakarta.

“You can see the city’s progress and prosperity in the many new hotels, cafes and restaurants, universities, streets and malls,” he said.

Minos said based on conversations with the locals there, they were proud of the ancient structure which they described as a golden gift by their past ancestors for posterity and prosperity

Located in the once remote and deep jungle of Central Java and quite close to Jogjakarta, Borobodur was discovered accidentally by Stamford Raffles in 1812 when the British controlled Java, and was excavated by the Dutch in 1835 until Unesco stepped in in 1973 and declared it a world heritage site.

Constructed by the great Buddhist artists and builders of the ancient Srivijaya civilisation, Borobodur is one massive temple of over 300 feet high, with unmatched religious sculptures and design.

Minos said the 1,000-foot high Bung Bratak also has its historical significance and is considered as the original and ancient ancestral home of the Jagoi-Bratak Bidayuhs of 30,000 people, who live in 33 villages in Bau and Lundu districts.

Based on accounts by elders and historical facts, the first Bidayuhs settled at Bung Bratak over 750 years ago and at its height, the settlement had seven longhouses and seven baruks (traditional round-houses for social and special gatherings).

The history of Bung Bratak was even mentioned by both early Dutch and British writers and historians.

The BBHC, costing RM8 million and funded by the federal Ministry of Tourism and Culture, is set to be open when the Bung Bratak Day is revived on May 1 this year after it was last held in 2013.