Monday, July 4
You are at:Home»News»Nation»France in favour of no ban, no discrimination against palm oil — Minister 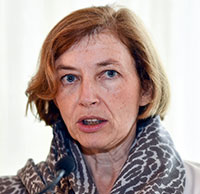 KUALA LUMPUR: France is in favour of no ban and no discrimination against palm oil, at national level and the European Union level, a French minister said yesterday.

French Minister of the Armed Forces Florence Parly told Malaysian Prime Minister Datuk Seri Najib Tun Razak this when she met the latter at his office in Putrajaya yesterday morning.

“He (Najib) raised the question of palm oil, and I told him that the French government understands perfectly the importance of palm oil for the economy of Malaysia, in particular for its rural development. Malaysia can count on France on this issue,” she told Najib and described the meeting with the prime minister as a very fruitful exchange on all issues.

Parly said France wanted to work together with producing countries to encourage sustainability in this sector, to the benefit of all sides and in the spirit of full dialogue and cooperation. The resolution by the EU Parliament on Jan 17, through the Renewable Energy Directive, requires that only sustainably produced palm oil can be imported into the EU market after 2020.

Touching on other matters, Parly said France and Malaysia shared concern regarding the threats to global order including terrorism, challenges to international law of the sea and cyber defence.

Parly said both countries also shared a vision on how to deal with these challenges, promoting international cooperation, multilateralism and dialogue between parties.

She said Malaysia and France military cooperation was dense and diverse, adding that the recent anti-submarine warfare exercise conducted by the French destroyer Auvergne and the Malaysia submarine KD Tun Razak demonstrated not only the exceptional skills and professionalism of the Royal Malaysian Navy but also the high level of cooperation between the two navies.

“Malaysia is our only partner in the region with which we conduct such exercise for the time being. The exercise was held twice in the past two years,” Parly said.

In addition, she said the ‘Jeanne d’ Arc’ training mission of the French Navy school squadron would visit Malaysia this year besides offering new opportunities for their armed forces to conduct bilateral exercises.

As both nations shared common interests and were affected by the same key issues, he said exchanges between the two armed forces personnel were crucial to enhance capabilities and improve interoperability. — Bernama