Monday, March 1
You are at:Home»News»Sabah»Elephant goes to school The elephant wandering around in the SMK Telupid dining hall. 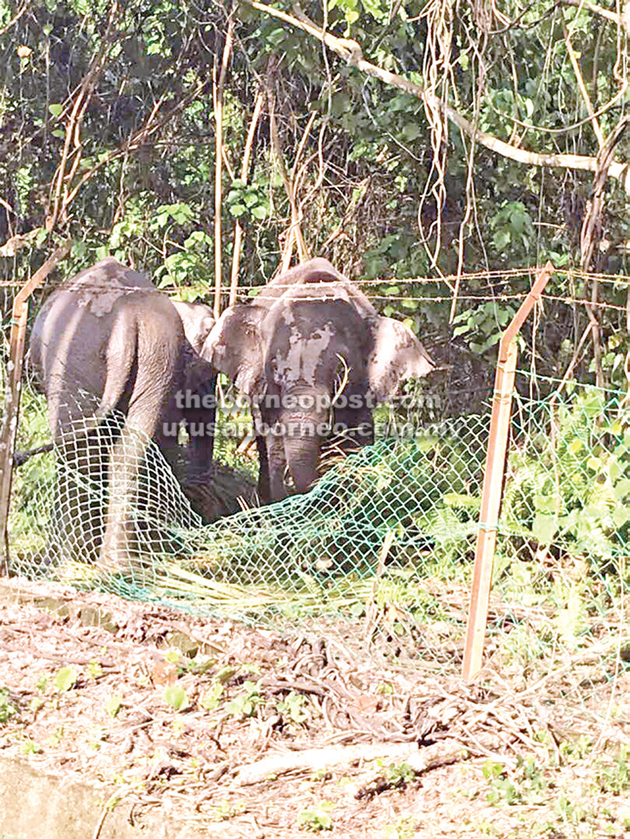 The elephant stomped through the school fence.

SANDAKAN: A Borneo Pygmy elephant entered a secondary school in Telupid and wandered around in its dining hall for several minutes in the early hours yesterday.

Wildlife Department personnel were called to guard the school for 24 hours.

According to SMK Telupid principal Rukimin Sulit, before the elephant entered the dining hall, it was eating a palm tree that was planted outside the hall as part of the school’s landscaping programme.

He said that the school’s security guard was cautious and waited for the elephant to leave the building on her own.

“This is the first time that an elephant had entered a building. However, around six elephants had been wandering around the school compound since February 17. Personnel from the Wildlife Department had taught us to refrain from provoking the elephants and instead, gently shoo them away.

“The elephants do not pose any threat to humans when they are not disturbed, so it is safe. School is going on as usual as they (elephants) are here only to eat the trees that we have planted, and do not disturb the students,” he added.

Rukimin said the elephants entered the school compound by stomping over the six-foot tall fence around the school.

He said that about 40 metres of the fence was now destroyed.

“The elephants are here to eat the palm trees, banana trees and other plants that we had planted for the school’s landscape.

“Since the elephants were spotted near the school compound on February 17, there have been personnel from Wildlife Department guarding the fence from time to time, but due to lack of manpower, they could not stay here all the time. Some of the personnel also got calls for elephant’s intrusion in villages nearby,” he added.

Rukimin also said that the school had made application to the Education Department for funds to fix the fence.

SMK Telupid currently has 1,349 students with 395 of them staying in the hostel.

Since early this year, about 20 elephants had been spotted around Telupid and villagers were affected when the elephants destroyed their properties and crops.

According to the Director of Wildlife Department (Sabah), Augustine Tuuga, the elephants were the same ones sent to the Deramakot Forest Reserve early last year, but had made its way back to Telupid since it began to move end of last year.

Augustine said that ever since the elephants returned, a total of four elephants were captured, including a mother and cubs.

The department had put satellite collar on one of the captured elephants to monitor its movement on Tuesday, while the other three elephants are in the process of being sent to Imbak Forest Reserve, about 100 kilometres away from Telupid.

“This time we send the elephants farther away in hope that the elephants would not return. It is an expensive procedure as it costs about RM30,000 to relocate one elephant.

“We may have the budget to capture and relocate five more elephants (to Imbak Forest Reserve), but after that we may not be able to take any other action. Currently, we are relying on our personnel, with the help of non-government organisations and the villagers to control the movement of the elephants,” he said.

Augustine said they would prioritise elephants which are more aggressive and injured to be relocated.