Thursday, January 20
You are at:Home»News»Sarawak»Nothing but blank paper 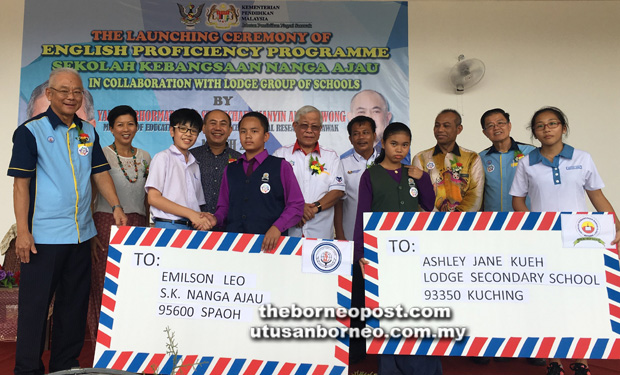 Manyin (centre), Rentap (fourth left) and other guests witness the launch gimmick for the ‘Pen-Pal Project’ at SK Nanga Ajau, involving some of its pupils and Lodge School students

BETONG: One of the requirements for applicants to be recruited into the state civil service is to write a simple essay in English during the interview, but there have been cases where some of them only submitted blank pieces of paper due to lack of proficiency in the language.

Education, Science and Technological Research Minister Dato Sri Michael Manyin Jawong said he was recently told about this situation, which involved graduates from the rural

He pointed out that while some previous applicants did attempt to write the essays albeit with incorrect grammar and sentence structures, the recent batch of potential recruits did not even jot down a single word.

“I was told that some of them submitted blank sheets of paper because they were scared to write (in English). If that’s the case, they could not even enter the civil service.

“That’s why I am serious about this English Proficiency Programme, because our community would become the victims at the end of the day (if nothing is done). I hope the communities and the schools would support this programme because this is the only way for us to move forward,” he said when launching the programme at SK Nanga Ajau here yesterday.

Manyin applauded the school, located in the Layar state constituency, for being the latest rural school to launch its own English Proficiency Programme, meant to improve English language skills among its pupils.

He said improving proficiency in English and increasing students’ interest in science, technology, engineering and mathematics (STEM) subjects are the priorities for the ministry since it was set up on May 7 last year.

He added that circulars had been given to all assemblymen and assemblywomen in the state, be they from the Barisan Nasional (BN) or the opposition, to adopt schools in their constituencies and implement the English Proficiency Programme.

This would follow the examples of SK Ulu Lubai and SK Ba Kelalan – two rural schools in Limbang, which have been implementing such a programme on their own over the past few years.

Manyin was confident that SK Nanga Ajau would become a role model for other schools – should the programme be implemented properly and the pupils become fluent in English.

“If SK Ulu Lubai – an Iban-majority area – can do it, why can’t SK Nanga Ajau achieve the same result?” he added.

Meanwhile, Layar assemblyman Gerald Rentap Jabu said SK Nanga Ajau was chosen for the programme as it had better student enrolment and facilities than other schools in the constituency.

He said as the assemblyman, he was committed to ensuring the success of the programme because he believed English proficiency would boost the employment chances of the children, once they leave school and enter the job market.

“High-income jobs all need candidates who are proficient in English. With good command in English, we can participate in digital economy and not be left behind,” he said.

The programme at SK Nanga Ajau is run in collaboration with Lodge Group of Schools.

The event yesterday gathered 28 Lodge students and six teachers for a ‘Pen-Pal Project’ with SK Nanga Ajau, where they also got the chance to experience life in the longhouse.

SK Nanga Ajau headmaster Fadreen Jingan said the school received an allocation of RM30,000 through Rentap for the implementation of various programmes meant to improve English language skills among the pupils.

Meanwhile, Lodge Group of Schools director Thomas Huo said the project provided opportunity for the school and students to contribute back to society.