Friday, January 21
You are at:Home»News»Sarawak»LRT details out end of this month 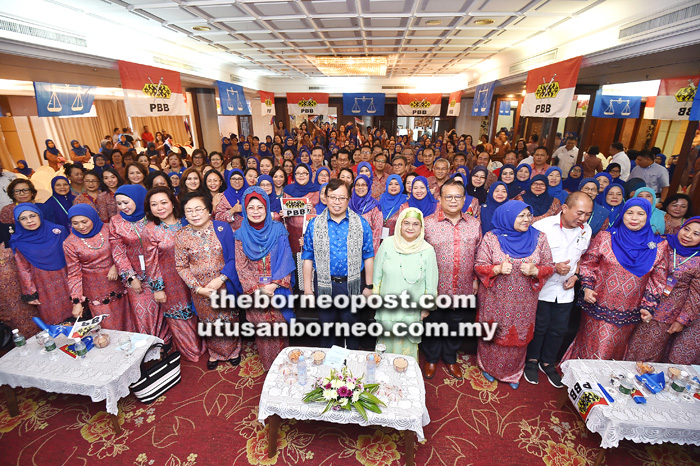 Abang Johari (centre) poses with others for a photo call.

“By the end of the month, I will reveal details on the route and it will not be just hot air,” said Abang Johari at the launching of PBB Women’s Wing Retreat at a hotel here yesterday.

The PBB president was referring to the opposition’s claim that his LRT vision was just hot air, which he regarded as insensible because the government needed to look into many details.

“There must be study on its route which we need to look into one by one, and we need to look at the cost first. That is why we take time to announce further details of the project,” said Abang Johari.

Stressing that there must be enough money for the project, he said the state government had its own business model and Development Bank of Sarawak (DBOS) to finance the LRT project.

“A journey of 1,000 miles starts with the first step, so let us in BN start this first. Soon leaders after me will continue my work and we hope that the train rail will continue to other parts of Sarawak as well,” he added.

The state government aims to start the LRT project as early as 2019 after feasibility studies are completed. The project is expected to be undertaken by the Sarawak Economic Development Corporation (SEDC).

Meanwhile, he advised PBB to adapt to change in order to attract the younger generation while remaining relevant.

He said the party has to constantly adapt to the political scenario which is constantly changing, and the younger voters will need assurance and confidence to be on the BN side.

“This is why I always stressed on the importance of adopting technology to stay relevant. We need to change our way of approaching our voters to ensure that they are in line with our vision and struggle,” he said. He also said the Women Wing of PBB must constantly change in order to be progressive, while at the same time giving ample opportunity for its younger leaders.

“If we as leaders don’t give enough opportunity for our young leaders to shine, confidence towards the party will also decrease. The gap between leaders and voters is also the yardstick to define whether the party is relevant or not,” he cautioned.

“There is a need for constant continuity in PBB. We always strive to look forward, in this sense, towards a modern Sarawak by 2030 as outlined by our Head of State Tun Pehin Sri Abdul Taib Mahmud,” he said.

On another matter, the Chief Minister said the manifesto by Pakatan Harapan which was launched recently did not reflect decentralisation as envisaged by its leader, Tun Dr Mahathir Mohamad.

“Back when he was the prime minister, it was him who wanted to take control of Sarawak Electricity Supply Corporation (Sesco), but the current Prime Minister Datuk Seri Najib Tun Razak returned the Bakun Hydro back to the state government,” he said.

He also pointed out that the BN manifesto, which is expected to be launched by Najib soon, would surely reflect the interests of Sarawakians in general, especially on powers which were eroded during Dr Mahathir’s era.

Earlier on, PBB Women chief Dato Sri Fatimah Abdullah said the wing aimed to become the core of PBB while turning the wing into the central core of development and continuity of the party at the grassroots level.

“We acknowledge four important pillars, which is membership, unity, function and finance, as vital towards achieving the mission and vision.

“To achieve that, we will look into recruiting more members, renewing commitment and spirit of comradeship between members and empowering members through capacity building,” said Fatimah.

The event yesterday also saw  the launching of the rebranded Skuad Sayang into Skuad Kasih Sayang (SKS+) and the PBB Women Wing’s election machinery and the wing’s Strategic Plan for 2018-2020.