Saturday, September 25
You are at:Home»News»Nation»RM1.5 billion in special ASB fund for PDRM members 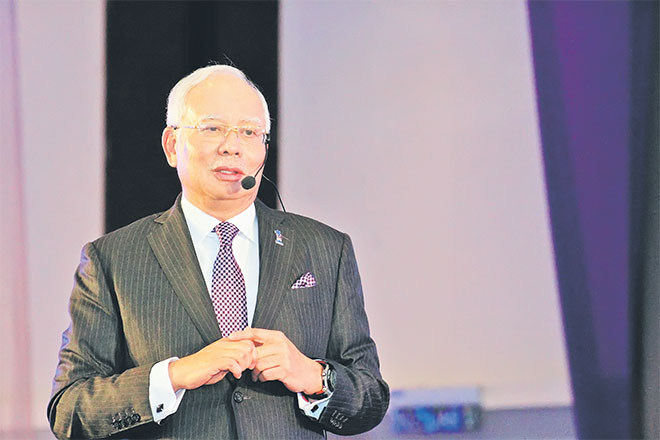 The announcement was made by the prime minister in his speech at the 211th Police Day Memorial Parade at the Kuala Lumpur Police Training Centre (Pulapol) here today.

In his speech, Najib also announced an allocation of RM15 million for repair work of all Pulapol quarters in Kuala Lumpur.

“Use the allocation, whether for repair of lifts or any damage in this area,” he added.

Apart from that, the Najib said the government also approved 10,000 units of houses under the 1Malaysia Civil Servants Housing Scheme – Royal Malaysia Police (PPA1M-PDRM, as announced in the 2018 Budget to help PDRM members who had yet to own a house.

“(Until now)  a total of 840 units have been approved for construction through a joint-venture between the police cooperative and a private company.

“This will be followed with 405 units, also for PDRM memebrs, in Putrajaya,” he added.

“These are some of the announcements as gifts for PDRM because I don’t want you to go home empty-handed,” he added.

Meanwhile, Najib expressed his appreciation to Ahmad Zahid, who is also Home Minister,  Mohamad Fuzi and all PDRM members for their service to the society and the country.

“This is an achievement that is very encouraging. Since we launched the national transformation policy and collaboration under the National Blue Ocean Strategy (NBOS), the country’s crime rate has reduced significantly by 53 per cent,” he said.

The prime minister said he shared the country’s success in addressing the Daesh threats with other foreign leaders in his speech at the closing of the Counter-Terrorism Conference in Sydney recently, where he was the only Asean leader invited to deliver a speech at the closing segment of the conference.

“In front of the Australian Prime Minister (Malcolm Turnbull) and all heads of government of the ASEAN countries, I said one of our pride is that not a single Malaysian has been killed, or became victim of IS or Daesh threats in our country,” he added.

He said in the 2017 Global Peace Index, Malaysia remained the third most peaceful country in Asia and was ranked 29th among 193 countries in the world.

Meanwhile, Najib said the number of PDRM members would be increased from time to time depending on needs.

Citing statistics by PDRM, the prime minister said 483 policemen had been killed while on duty since 1994, including during the Lahad Datu intrusion in 2013 which claimed the lives of eight policemen.

“I wish to share the sad story on the sacrifice by the late Corporal Mohd Azrul Tukiran, one of the national heroes killed in the Lahad datu incident, where he joined the police force because he wanted to make his parents proud.

“And today,  with a sincere heart I say that Corporal Mohd Azrul had not only made his parents proud, but his heroic deed had made all Malaysians proud,” he said. – Bernama