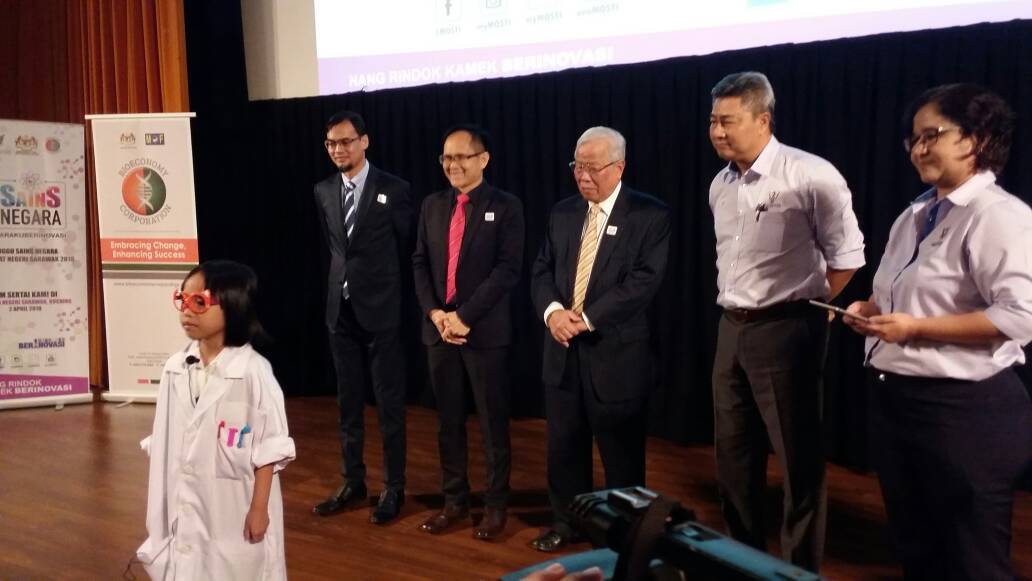 Manyin (third left) together with Dr Ramzah (second left) listening to Herschelle Aurora, a primary one student from SK St Teresa, describing what STEM is about prior to the launching ceremony this morning.

KUCHING: The National Science Week programme organised by the Ministry of Science, Technology and Innovation of Malaysia (Mosti) aims to raise awareness on the importance of science, technology and innovation (STI) at all levels of society in Malaysia.

Held simultaneously across the nation on the first week of April, the programme also aims to address the gap between science and society by featuring a variety of interesting and interactive “science” programmes, targeted at the various levels of society such as students, educators, scientists, youth, public sector, non-governmental organisations (NGOs) and the private sector.

“Everything we have today is what science and technology have done for us,” said Minister for Education, Science and Technological Research Dato Sri Michael Manyin Jawong, who officiated the state-level event at the Sarawak State Library (Pustaka) this morning.

He also called upon students to pursue Science, Technology, Engineering and Mathematics (STEM) to prepare the state and nation to compete in Industrial Revolution 4.0.

In Sarawak, the Malaysian Bioeconomy Corporation (Bioeconomy Corp), a government-linked company under Mosti has taken the lead to organise a one-day STEM based activities event, with the support of the Ministry of Education, Science and Technological Research, Sarawak (MESTR), the Sarawak State Library and other research based agenda and institutions here.

The programme also featured stage presentations by lecturers, graduate students and officers from the agencies and Institutions, such as topics on Waste to Fuel, dengue control and biocementing by Swinburne, Biotech in Food and BioBingo by Bioeconomy Corp, and Weather Idol by the Meteorological Department.

These talks, along with the hands on activities for the visitors are also targeted at enhancing human capital development and attract students to choose STEM subjects in pursuing higher education and careers.

Also speaking was Mosti deputy secretary general Associate Professor Dr Ramzah Dambul, who said the event is in line to the United Nations Organisation for Education, Science and Culture’s (Unesco) World Science Day, which has been implemented since 2002.

“Through this celebration, the government intends to create a society that understands, cultivates and applies science, technology and innovation in their daily lives,” he said, adding that this was why numerous efforts, such as the National Science Week event, were held as a platform to attract more people especially students to embrace STEM, which is in line with the aspiration of Transformation 2050 (TN50).